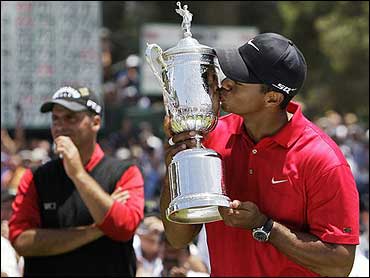 Eight months after winning the U.S. Open on one good leg, a healthy Tiger Woods is returning to golf.

Woods said on his Web site on Thursday that he will defend his title next week in the Accenture Match Play Championship, believing his reconstructed left knee and his game were good enough to win.

The Match Play Championship in Tucson, Arizona begins on Wednesday, where Woods will end his 254-day break from competition.

The timing could not be better for the U.S. PGA Tour, which has seen television ratings plunge after the world's No. 1 player had to miss the second half of the season, including two majors, the Ryder Cup and the FedEx Cup playoffs.

"We are delighted that Tiger is returning to competition and look forward to watching him compete next week," commissioner Tim Finchem said in a statement.

The last shot Woods hit was a short par putt on the 91st hole of the U.S. Open at San Diego, where he defeated Rocco Mediate in a playoff to capture his 14th major, which Woods described as "probably the best ever" under the circumstances.

He had surgery after the Masters last year to repair cartilage damage in his left knee, and while preparing to return for the U.S. Open, suffered a double stress fracture in his left leg.

He limped badly over the final few days of the U.S. Open, later saying the swelling was so bad at night that he couldn't see his knee cap. A week after winning, he had reconstructive surgery, the third operation on his left knee in five years.

He began hitting short irons toward the end of December, and friends such as Mark O'Meara and John Cook said he had been playing plenty of golf over the last few weeks at his home course in Florida.

The last big obstacle to his return was the birth of his son, Charlie Axel, on Feb. 8.

"Elin and our new son Charlie are doing great," Woods wrote. "I've enjoyed my time at home with the family and appreciate everyone's support and kind wishes."

Woods will be under even greater scrutiny when he returns at Match Play, a tournament that was unpredictable even with two good legs. The eight-month break was the longest he has ever gone without playing, and there are questions of rust and how much he has modified his swing after the knee surgery.

Even so, swing coach Hank Haney said last month that Woods would not return until he thought he could win.