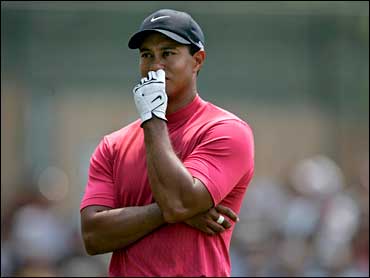 In a public statement Tiger Woods said the car accident early Friday morning in which his SUV hit a fire hydrant and then a tree was "embarrassing" and entirely his fault.

The world's No. 1 golfer, who was sent to the hospital following the accident, canceled an interview with state troopers for the third straight day.

The Florida Highway Patrol said this afternoon that an attorney contacted them saying he had been hired by Woods and that the interview scheduled for today has been canceled.

Police also release audio of the 911 call made early Friday morning regarding the accident.

The traffic crash remains under investigation and charges are pending.

CBS News correspondent Randall Pinkston reports that Florida authorities may be seeking a search warrant to try and determine whether the injuries he sustained were caused during the car crash, or prior to it.

Florida law enforcement officials, however, deny they are seeking any search warrants.

CBS News legal analyst Lisa Bloom tells "The Early Show" that a search warrant would be relatively easy for police to acquire, if they wanted one, and that they do have legal obligation to pursue any allegations of spousal abuse. However, notes Bloom, there have been no such allegations made in this case.

The crash prompted immediate speculation that Woods had argued with his wife over a tabloid story claiming the golf star had been spotted in Australia at a hotel with a New York City socialite.

In his statement, posted online at tigerwoods.com, Woods accepted responsibility for the incident, and also states his wife, Elin, acted "courageously" when she saw that he was hurt. He said any other
assertion is "absolutely false."

"As you all know, I had a single-car accident earlier this week, and sustained some injuries. I have some cuts, bruising and right now I'm pretty sore.

"This situation is my fault, and it's obviously embarrassing to my family and me. I'm human and I'm not perfect. I will certainly make sure this doesn't happen again.

"This is a private matter and I want to keep it that way. Although I understand there is curiosity, the many false, unfounded and malicious rumors that are currently circulating about my family and me are irresponsible.

"The only person responsible for the accident is me. My wife, Elin, acted courageously when she saw I was hurt and in trouble. She was the first person to help me. Any other assertion is absolutely false.

"This incident has been stressful and very difficult for Elin, our family and me. I appreciate all the concern and well wishes that we have received. But, I would also ask for some understanding that my family and I deserve some privacy no matter how intrusive some people can be."

The statement was posted about an hour before state troopers were to meet with Woods at his home. A meeting was not rescheduled.