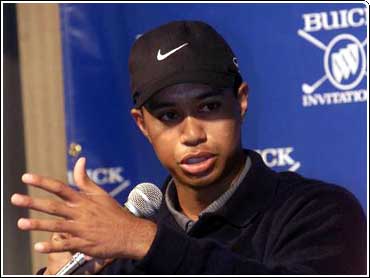 The PGA Tour just happens to be stopping at one of Tiger Woods' favorite courses.

And Woods, of course, just happens to need a win in the Buick Invitational, which starts today at Torrey Pines, to run his winning streak to seven and break a tie with Ben Hogan for the second-longest run in golf history.

Maybe that's why Woods couldn't wait to get to Torrey Pines, the municipal course with a million-dollar setting on bluffs overlooking the Pacific Ocean.

Despite all the emotion and hoopla of his incredible win at Pebble Beach on Monday, Woods was on the Torrey Pines North Course at 6:15 a.m. Tuesday, getting out while the greens were fresh.

"It's a great environment to play in," Woods said Wednesday. "I have some good memories from this golf course, not only from last year, but from junior golf. Even the times I played as a professional, I guess overall I felt really well."

Woods tamed Torrey as a 15-year-old junior, and he did it last year with a spectacular weekend of golf to win the Buick Invitational.

With a gallery of some 2,000 watching Wednesday's pro-am, Woods sank a 15-foot eagle putt on the 18th at Torrey Pines South to end his round.

Last year, Woods sank a similar eagle putt on the same hole to end a nine-month victory drought. After making the cut by just two strokes, he came back and played 17-under during the weekend.

His Saturday round of 62 broke the South Course record and was his best round as a pro, which he later lowered to 61 in the Byron Nelson Classic in May. His 65 on Sunday allowed him to tie George Burns' 1987 tournament record of 22-under 266.

His Buick victory came after months of trying to get comfortable with a new swing.

"It was nice to know that I could do it with the new changes implemented," Woods said. "I barely made the cut, and came out on the weekend and played great."

"That's when I knew the swing changes we were working on were coming together. I was able to swing naturally, instead of having to worry about each position on my backswing and on my downswing, and trying to feel it. I could just get up there, see the shot, hit it, and there it was."

"Everything about it was indicating that it was just a matter of time before it came together, and it stayed together for a while."

It's still together, but Woods said it certainly won't be easy to break Nelson's record.

Woods said he has a chance to catch Nelson. "But the chances are very small. Very small," he said.

Woods claims the only time he thinks about his streak is when asked by reporters.

But Woods already knows what the huge gallery expected this weekend will be cheering for.

"It's just interesting that here people talk about the streak, rather than the shots I'm hitting or the putts I made here and there. And I think that's more important than the streak because that's what keeps it alive."

There's a reason people are excited about the streak, Arnold Palmer said during an interview on The Golf Channel.

"It's amazing if you think about it. He's 24 years old and he already has a path in back of him," Palmer said. "He is drawing a line, and it's going to be tough for anyone that I see right now to touch him, if he keeps his mind about his business and enjoys the game."

^DIVOTS: Bryon Bell, a friend of Woods from high school, will caddy this week, as he did for Woods last year in the Buick and the Match Play Championship as a way to raise money for medical school. "I felt that's the right thing to do," Woods said. "We won last year, and I would feel uncomfortable if I had someone else on the bag because he has the right to defend his title, too."