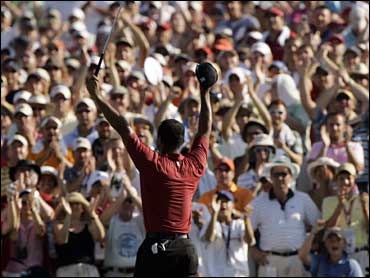 A season of first-time major winners ended with a familiar champion — Tiger Woods, who seems to win them all.

Challenged only briefly Sunday along the back nine of steamy Southern Hills, Woods captured the PGA Championship to win at least one major for the third straight season and run his career total to 13 as he moves closer to the standard set by Jack Nicklaus.

Woods closed with a 1-under 69 for a two-shot victory over Woody Austin, a gritty journeyman whose consolation prize was earning a spot on the U.S. team for the Presidents Cup.

Ernie Els also made a brief run at Woods, but the ending was all too familiar.

The only thing different about this title was how it ended. Woods became the first major champion in seven tries to make a par on the 72nd hole at Southern Hills. And it was his first major as a father, walking into the scoring room with wife Elin holding their 2-month-old daughter, Sam Alexis.

Naturally, the kid was dressed in red.

"That's a feeling I've never experienced before," Woods said. "To have her here, it brings chills to me. I was surprised she was out here, to see her and Elin there. It's just so cool."

Woods, who has never lost a tournament when leading by more than one going into the last round, stretched his three-shot lead to five with back-to-back birdies that appeared to siphon all the drama out of the final major of the year. Austin made a surprising charge, however, and Woods three-putted for bogey on the 14th that dropped his lead to one.

That was as close as it got.

Woods hit two perfect shots on the 15th and holed a 10-footer for birdie, pointing to the cup after it fell.

"Winning becomes almost a habit," Els said after his 66. "Look at Tiger."

Woods, who finished at 8-under 272, now has more majors than the rest of the top 10 in the world combined. At age 31, he is well ahead of the pace Nicklaus set when he won his record 18 professional majors. Nicklaus was 35 when he won his 13th.

Austin closed with a 67 and earned plenty of crowd support as the working class hero.

Austin, a 43-year-old former bank teller playing in only his 15th major, had a 12-foot birdie putt on the 15th hole that would have tied him for the lead, but it slid by on the left. He never seriously threatened birdie the rest of the way in closing with a 67.

The highlight was a 60-foot chip-in for birdie on the 12th, with Austin tugging on his ear to get the crowd to pump it up.

"I was trying to get them to go crazy for someone else, so he'd know there's someone else out here," Austin said. "There's no roar like his. It was nice to hear the loudest one I've ever heard for me."

But it wasn't enough.

After his three-putt bogey on the 14th, Woods hit every fairway and every green the rest of the way. Woods' final stroke was a 3-foot par on the 18th hole, and he took his time. In the last major at Southern Hills, Retief Goosen three-putted from 12 feet that forced him to win the U.S. Open the following day in a playoff.

Woods removed the ball from the cup and stuck it in his pocket, then removed his cap and thrust both arms in the air as sweat poured down his face from a fourth straight day with temperatures topping 100.

He won for the fifth time this year — no one else has won more than twice — and for the second straight week, coming off an eight-shot victory in the Bridgestone Invitational at Firestone.

Stephen Ames, who played in the final group with Woods, made bogey on the first two holes and wound up with a 76.

Arron Oberholser settled down after a bogey-bogey start for a 69 that gave him a tie for fourth at 1-under 279 and secured a spot in the Masters next year. John Senden shot 71 and also finished at 279.

Els said if had been watching from home, he would have bet the house on Woods winning his 13th major. Inside the ropes, the Big Easy played as though he had an ace up his sleeve. Birdies on two of the first five holes at least got his name on the leaderboard, and Els kept plugging away with another birdie on the eighth that briefly drew him to within two shots.

Woods was two groups behind, and after a sluggish start, he began to separate himself from his challengers. He followed a 5-foot birdie on the seventh with a 25-foot birdie putt from just off the green at the par-5 eighth. Woods backpedaled as the ball drew near the hole, then slammed his fist in celebration.

But his knee buckled slightly on the slope, and he appeared to wince. His walk was steady down the ninth fairway, but that five-shot lead was anything but that.

Els continued to gamble, waiting for the 10th green to clear and belting driver on the 366-yard dogleg to just left of the green, leaving him a simple up-and-down for birdie. And even though he missed a 6-foot birdie on the 11th and took bogey on the 12th with an approach into the back bunker, the South African didn't back down.

He two-putted for birdie on the 13th, then hit his tee shot on the 14th about 4 feet behind the hole for another birdie to reach 6 under, only two shots behind. And when Woods three-putted the 14th, the lead was a single shot.

"I felt like, you know, I got myself into this mess, now I've got to go earn my way out of it," Woods said. "I did some serious yelling at myself going to the 15th tee."

The bigger threat turned out to be Austin.

Wearing the same shirt he had on when he closed with a 62 to win in Memphis, he ran off three straight birdies starting at No. 11, the most unlikely coming at No. 12 when he chipped in from the front of the green to a back pin.

The cheers died in the final hour and the outcome was inevitable.

Until proven otherwise, Woods simply doesn't lose when he has the lead going into the final round. He took control of this tournament with his record-tying 63 in the second round, and became the fifth player to shoot 63 in a major and go on to win.