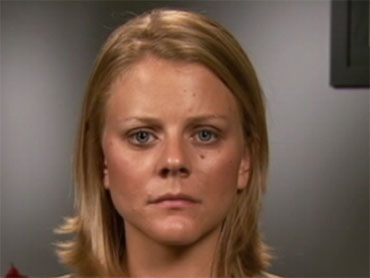 Over the weekend, Mexican soldiers searching for the body of David Hartley reportedly got into a gun battle with suspected members of Zeta, the violent Mexican drug gang. And now, police say two leaders of that gang are suspects.

On "The Early Show" Monday, Tiffany Hartley, David's wife, said she feels vindicated now that her story -- that pirates attacked her and David on a Texas lake that straddles the U.S.-Mexico border -- is being believed. Initial statements from Mexican authorities indicated doubt about whether the attack -- reportedly on the Mexican side of the lake -- even happened.

Would Tiffany recognize them?

She told "Early Show" co-anchor Harry Smith, "I couldn't tell you. I don't remember, really, being able to describe or even kind of get an idea of what these guys looked like. Possibly, maybe it would come back to me, but I was more focused on the gun and hoping, you know, they wouldn't shoot me."

CBS News correspondent Don Teague reported Falcon Lake and the surrounding area have been called a hornet's nest of criminal activity for the Zeta cartel, a powerful and fierce Mexican gang that's not shy about letting its presence be known.

Zapata County Sheriff Sigifredo Gonzalez Jr., who is investigating the shooting, told CBS News, "It's happened before where we are patrolling and we see individuals coming across into the United States with machine guns."

Authorities haven't released photos of the suspected brothers, but the two are also wanted for several other crimes, including homicide, kidnapping and arson.

In addition to blood evidence found on Tiffany Hartley's life vest, dash cam video taken from a police cruiser provides more support for Tiffany Hartley's story that Mexican pirates attacked the couple while they were jet skiing on the lake and taking pictures of a sunken church.

In a video shot from a police "dash-cam," the couple can be seen being pulled over shortly before getting to the lake, jet skis in tow.

The trooper can be heard asking, "Where you headed to?"

David Hartley replies, "Out to Falcon"

The trooper says, "To Falcon?"

The trooper says, "Going jet skiing for the day, or what?"

David can be heard saying, "Yeah, I figure we'll play around for a bit."

Johnny Hernandez, of the Texas Department of Public Safety, told CBS News, "It proves that they were together. That they were en route to Falcon Lake to enjoy the day."

Tiffany said on "The Early Show," the border patrol saw the couple several times on their way to the lake.

"We have points of being pulled over and being at Subway with the border patrol seeing us there. It just, you know, shows my story that, yeah, David and I were there together, we were at the boat launch together, you know, we had got stopped and Subway and that, you know, everything happened exactly the way I've been telling you guys."

Tiffany says she is hopeful.

Since the alleged attack, Tiffany has returned to Falcon Lake. She said the visit was difficult.