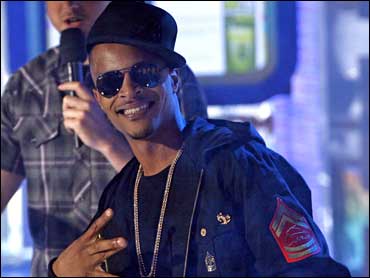 The rapper, who is locked up in an Arkansas penitentiary on a federal weapons conviction, won the best collaboration award with Rhianna for the song "Live Your Life" and the album of the year award for "Paper Trail." His fiancee Tameka "Tiny" Cottle accepted his awards at the ceremony in Atlanta and read a letter by the rapper, who began serving a year-long sentence in late May.

"Although I'm not there with you all, I'm there in spirit," Cottle quoted the rapper as writing. "My road to redemption is almost over. ... Thanks for the support."

Jay-Z was honored as the "MVP of the Year," while Drake took home "Rookie of the Year," and Ice Cube received the "I Am Hip-Hop" icon award.

Ice Cube said he was humbled by the award, and he believes his career as a filmmaker could earn him more honors in the future. He helped launch the gangsta rap genre with the group NWA, and he starred in the films "Barbershop" and "Friday," which he also co-wrote.

"When you get recognized by your peers for a life of work, you got to be humbled," the rap veteran said. "I'm honored by this. I have 20 more years of work left in me. I hope (BET) is ready to give out two of these awards."

Rapper Busta Rhymes presented the award for "DJ of the Year" to DJ AM, the celebrity spinner who died of an accidental drug overdose in August.

Kanye West, meanwhile, couldn't hijack the stage, because the rapper was a no-show. West had been expected to attend the fourth annual awards show. He was sharply criticized for interrupting Taylor Swift's award-winning moment at last month's MTV Video Music Awards.

Jay-Z took the stage with Young Jeezy to perform "Real as It Gets" and rap group Goodie Mob performed its 1995 song "Cell Therapy."