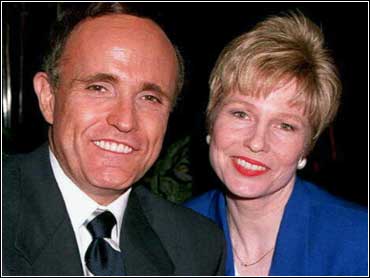 The estranged wife of New York Mayor Rudolph W. Giuliani has asked a judge to bar his girlfriend from Gracie Mansion, the mayor's official residence.

Giuliani and wife Donna Hanover continue to live at Gracie Mansion with their two children. But Giuliani's grilfriend, Judith Nathan, has appeared frequently in public with the mayor since he announced last spring that he was seeking a legal separation from Hanover.

On Monday, Hanover's lawyers asked for a temporary restraining order and a preliminary injunction blocking Nathan from the mansion.

Lawyers for both the mayor and Hanover spent more than an hour in a closed hearing arguing a motion that was filed Thursday. It was unclear when the judge would rule on the motion.

Gracie Mansion is often used as the site for news conferences and other public events, and Hanover's request raised the question of whether the building should be considered a public place or a marital residence. Divorce lawyers not connected with Giuliani's case told The New York Times that motions to keep extramarital relationships out of marital residences are not uncommon, particularly if there are children involved, and that such motions are often granted.

It was unclear how many times and in what circumstances Nathan has been to Gracie Mansion.

Lawyers for both sides declined to comment after Monday's hearing. Giuliani was at a charity golf tournament and did not attend.