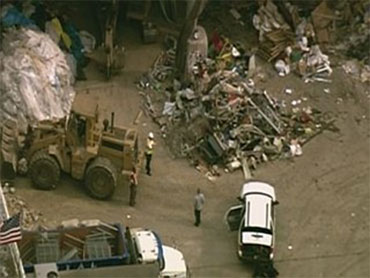 Three workers hired to clean a putrid well at a waste transfer station died Monday when they apparently were overcome by toxic fumes, the fire department said.

Initially one worker fell or climbed into a shaft that's part of the well and the other two went in after him when he didn't return, said John Sudnik, fire department deputy assistant chief of the Queens borough command.

The fire department now says two of the victims were a father and son -- 49-year-old Shlomo Dahan and 23-year-old Harel Dahan of Brooklyn, along with 52-year-old Rene Francisco Rivas of Queens. The medical examiner will determine what caused their deaths.

Police say the father and son were cleaning the well in Queens on Monday when the son fell down a narrow shaft. The father grabbed a ladder and climbed down to rescue his son, followed by Rivas.

The men were hired to clean out a basin intended to catch water and waste from the transfer station, where garbage is sorted for recycling. The entrance to the basin is through a manhole 3 feet wide; the basin is 18 feet deep.

The men likely were overcome by hydrogen sulfide, a toxic gas common in wells like the one to be cleaned Monday, Sudnik said. The gas is created by water and decomposing garbage. About 100 parts per million of the gas in the air is considered incredibly dangerous, and crews were getting readings at the scene of 200 parts per million, Sudnik said.

Emergency crews got a call around 2:30 p.m. and were on the scene seven minutes later. By the time they reached the workers, they were dead, Sudnik said. It took about 20 minutes to pull them out.

The waste transfer station, called Royal Waste Services, is attached to the Regal Recycling company. A person who answered the phone there wouldn't comment.

The transfer station is in an industrial stretch of Queens, with a gravel road leading to the facility, not far from a Long Island Rail Road station. The stench of garbage permeates the area. A sign saying "putrescible solid waste" and another that says "No drums, asbestos, hazardous materials, medical waste or tires" hang at the gate.

The names of the workers weren't immediately released. The medical examiner will determine the causes of their deaths.

Abe Rosenthal, who said he was a friend of one of the victims, arrived on the scene with a rabbi after getting a call about the accident. He said his friend was the owner of the company and possibly died with a son who worked with him.

"I can't believe what happened," Rosenthal said. "He was the sweetest guy, a good father."