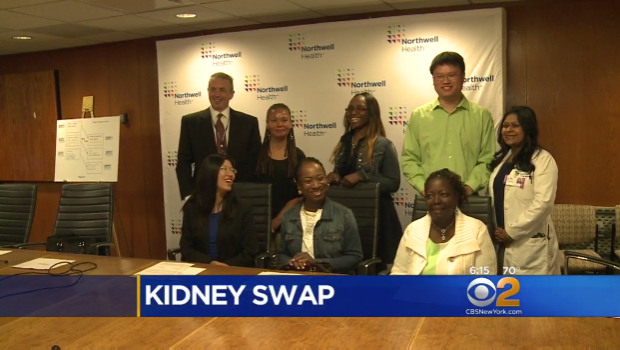 A remarkable kidney swap involving donors who weren't matches for loved ones but for perfect strangers has prompted the nickname "matches made in heaven."

CBS New York reports that the donors expected to give their kidneys to loved ones, but found out that they weren't good matches.

But operations did happen, as part of a three-way daisy chain kidney swap carried out at North Shore University Hospital in Long Island.

It began with Dawn Bates, who, it turned out, was not a match for her niece Nicole Johnson. A search of the living donor registry revealed that someone else, a stranger named Catherine Richards was ideal.

Richards, a Hempstead teacher, was tearful she met the woman who now has her kidney.

"I did whatever I could to make sure she can live her life," she said in a press conference.

Meanwhile, Richards' mother-in-law, who she had been incompatible, with turned out to be a perfect match to receive donor Terry Fung Ching's kidney.

"I'm so grateful. It wasn't easy. I have a new life. I feel good," Elaine Richards said.

Fung Ching was not a match for his wife Tiffany, but the chain was completed when it turned out that Bates, who started the whole process, was an ideal match for her.

"I just planted seeds, and this here is the garden, and it's a beautiful garden," Bates said.

The three-way swap was complicated, but surgeons say with the increasing numbers of living donors volunteering across the country using daisy chains are greatly improving the odds of finding a match for patients in critical need of a transplant.

"Over 100,000 people are waiting for a kidney transplant in the United States," Dr. Nicole Ali explained.

Doctors said the success rate is higher, and patients live longer with organs from a living donor.