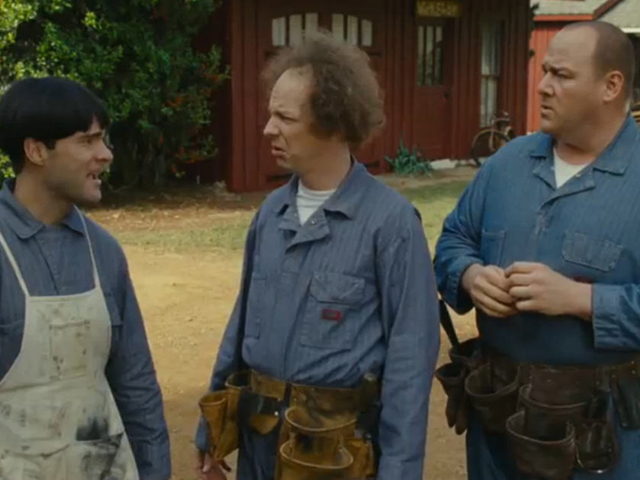 (CBS) The Farrelly brothers have unveiled the first trailer of their "Three Stooges" movie, which seems to stick with Larry, Moe and Curly's classic slapstick sense of humor.

The trailer, which runs for roughly two minutes, opens with the trio being dropped off as babies in front of an orphanage. Each of babies made to look like their adult counterpart, hair and all, kick off the slapstick with their iconic eye-poking gag.

The rest of the trailer features other classic "Three Stooges" gags and quotes, along with some modern twists - including a cameos from the "Jersey Shore" cast members JWOWW and Snooki.

Other celebs spotted in the trailer include Sofia Vergara and Jennifer Hudson, as a singing nun.

The film stars Sean Hayes, as Larry, Chris Diamanttopoulos, as Moe, and Will Sasso, as Curly. In the reboot of the classic the stooges set out to save their childhood orphanage and end up stumbling into a murder plot, as well as starring in a reality TV show.

The comedy is set to open in theaters April 13.

Tell us: What do you think of the "Three Stooges" trailer below?