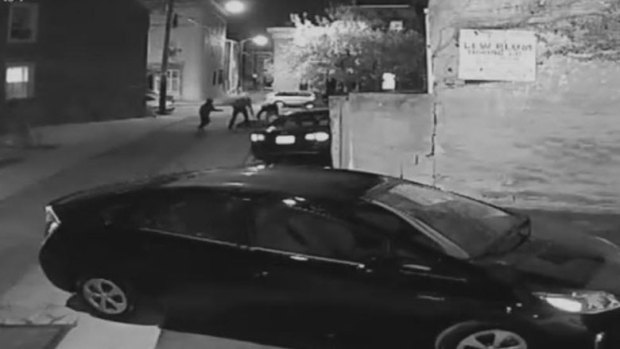 PHILADELPHIA -- Police are searching for three suspects who violently beat a teen in Philadelphia last month -- and it was all caught on video, reports CBS Philly.

The assault happened around 12:45 a.m. on Sunday, Nov. 16 in the city's Kensington neighborhood, according to the station. The 17-year-old victim had been waiting outside his friend's house for a ride home, investigators say.

In the video, the victim is approached by three suspects and one of them -- without warning -- sucker-punches the teen, knocking him down to the ground. Two other suspects soon join in, kicking the victim and punching him in the head.

The victim suffered a broken jaw and shattered teeth, according to CBS Philly.

The suspects also appeared to reach into the victim's pockets as if to steal something, reports the station.

Police officials are asking that anyone with information to call 215.686.TIPS (8477). The department is also offering a $1,000 reward for the arrest and conviction of the suspects responsible.