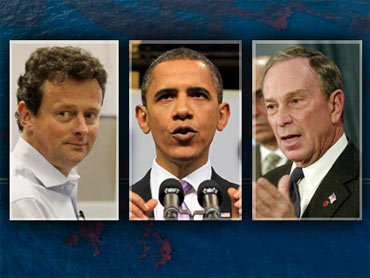 This commentary was written by CBSNews.com Editor-in-Chief Daniel Farber.

BP CEO Tony Hayward is in the hot seat.

Every day that more oil spills into the Gulf and reaches U.S. shores, his personal stock (not to mention his company's stock price) suffers. And he is clearly in President Obama's dog house.

But Hayward is not without friends in this country. New York Mayor Michael Bloomberg and Coast Guard Admiral Thad Allen, who is in charge of the Unified Command dealing with the spill, don't appear to believe he is untrustworthy or worth shoving overboard.

Mayor Michael Bloomberg knows what its like to run a big company. The billionaire founded the financial information behemoth Bloomberg, which employs 10,000 people across 135 countries.

On his weekly radio show Friday, Bloomberg expressed some sympathy for Hayward. He said that the world should not rush to judge the BP, and that BP's leader "didn't exactly go down there and blow up the well." He advised focusing on how to fix the problem, and leveraging BP's expertise, and then figuring out who to blame.

Bloomberg goes too easy on the CEO. Hayward didn't intend for the well to rupture so catastrophically, but he was responsible as the man at the top of the oil company for the lax safety standards and response plans.

As for Adm. Allen, who has the last word when an issue comes up with BP's handling of the situation, he said in a press briefing Friday that he trusts the BP CEO.

"The fact of the matter is we have to have a cooperative productive relationship for this to work moving forward. When I talk to him, I ask for answers, I get them. You could characterize that as trust, partnership, cooperation, collaboration or whatever, but this has to be a unified effort moving forward if we're gonna get this thing solved," Adm. Allen said.

Adm. Allen just wants the leak fixed, and he wants his life back too. The path to that outcome depends greatly on BP, which has the expertise for dealing with stopping the flow of oil.  However, patience is growing thin.

"I have spent more time fighting the officials of BP and the Coast Guard than fighting the oil," Plaquemines Parish President Billy Nungesser said. "We've got to find someone to put in charge who has the guts and the will to make some decisions."

In contrast to Mayor Bloomberg and Adm. Allen, President Obama has shown less trust or respect for Tony Hayward. In fact, during an interview with NBC, Mr. Obama said that he would fire the BP CEO if he worked for him.

The president is trying to salvage a political situation that has gotten out of control. He can't stop the leak or the constant drumming that he has not been forceful or present enough during Gulf oil spill crisis. People want tough talk from the president, and he is not looking for a photo op with the punching bag BP CEO.

He'll likely settle for the less visible Chairman of the board of directors at BP, Carl-Henric Svanberg, next week in Washington. And, he'll have to take his share of the blame (in addition to blaming his predecessor) for the cozy and dysfunctional relationship between the MMS (Mineral Management Service) and the government.

At the end of the day, there is plenty of blame to go around, and Tony Hayward will get his life back and fade into the background. Unfortunately, he will always be remembered as the face of an epic environmental and economic disaster.