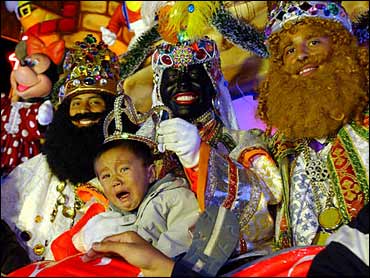 January 6 is the Twelfth Day of Christmas - the end of the holiday - celebrated as the Feast of the Epiphany on the Christian calendar, but better known as Three Kings Day in Latin countries and many U.S. cities.

The feast commemorates the day on which, according to the Bible, the Three Kings visited the infant Jesus, bearing gifts of tribute.

In New York, Mayor Michael Bloomberg will be among the many marching Tuesday in the annual Three Kings Day - Los Tres Reyes - parade. Celebrations on a smaller scale are also being held in Boston, Chicago and Philadelphia.

In many Spanish-speaking countries, Three Kings Day is the big feast - bigger than Christmas Day.

On January 5th, children put their shoes out on balconies, terraces, windowsills and terraces, waiting for the Three Kings to ride by - like Santa Claus coming down the chimney - and leave them presents.

It's also customary to leave a bottle of wine and cakes for the Kings.

Just as with Santa Claus, children write letters to the magi (the Kings) asking for gifts which are left for them on Jan. 6.

In Madrid Monday, thousands of children and adults crowded the streets of Madrid in a flurry of sweets, confetti and soap bubbles to greet locals costumed as the three wise men in one of dozens of Epiphany feast parades held across Spain.

The kings' carriages - opulently decked out in palm fronds, glitter and lights - paraded from Madrid's Retiro park along the city's boulevards toward the central Plaza Mayor square, in what is traditionally the biggest of the annual processions.

Dozens of other floats featured storybook characters such as Alice in Wonderland and the Wizard of Oz, giant flowers and animals. Children and adults - many in fancy dress costume - showered sweets over expectant onlookers bunched along the sidewalks.

Gospel singers and a brass band welcomed the kings - Gaspar, Melchior and Balthasar - onto the Plaza Mayor.

In the annual message to the children of the city, Melchior, played by a local politician, promised all presents would be delivered during the night. He also reminded children of the greatest gifts - love, peace and justice - and urged them to work to create an open and egalitarian society in their city.

In the northern port of Gijon, the Magi arrived by boat. In the city of Vitoria, the kings, mindful of diabetic children, handed out sugar-free candy, while in the southern city of Seville, floats showered 90 tons of sweets onto streets filled with revelers, Spain's national news agency reported.