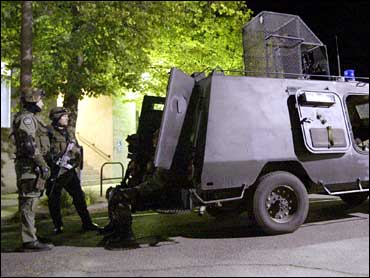 A sniper sprayed dozens of bullets on a courthouse in an attack that left one dead and two wounded, then hid in a nearby church for several hours before police stormed in Sunday and found his body and another man's inside, police said.

The shooting began late Saturday, fatally wounding one officer and injuring another and a civilian, said David Duke, Moscow's assistant police chief. Duke said the attack was apparently an ambush, with the gunman firing into the Latah County Courthouse to lure people into his line of fire.

Shortly after 6 a.m., three SWAT teams entered the First Presbyterian Church and found the two bodies on the main floor but not in the same room, Duke said. An automatic assault rifle, ammunition and spent shells were found with one of the men, he said.

Duke identified the slain officer as Lee Newbill, who had served with the Moscow Police Department since March 2001 and was the first city officer ever killed in the line of duty. He had died by the time he arrived at a local hospital, Duke said.

Authorities did not release the name of the injured civilian, but said he lived in the neighborhood and had gone outside after hearing the gunshots. The man was undergoing surgery and was in stable condition.

Police said the gunman started shooting from a parking lot across from the Latah County Courthouse shortly after 11 p.m. Saturday. A hail of more than 30 bullets ripped through the county's emergency dispatch center, Duke said. Dispatchers were moved to a room in the jail area of the courthouse. Officers rushed out of the building.

"Whoever the shooter is wanted to draw people to the courthouse," Duke said. "When officers responded, he did open fire on them."

Newbill was the first officer at the scene of the shooting and was hit around 11:35 p.m. Saturday. Jordon, a 17-year veteran, was shot shortly after midnight as he tried to seek cover behind a tree after pulling Newbill out of the line of fire, Duke said.

"He was just shooting at anybody he could," Duke said.

Four empty magazines were found outside the church. Duke initially estimated that 75 shots were fired, but later said it was not clear exactly how many shots the gunman fired.

Officers surrounded the church, which is across the street from the courthouse and nestled in a residential neighborhood near downtown and Moscow High School. A final shot was heard from inside the church about 1 a.m. Sunday, Duke said.

Streets in the area had been barricaded and residents had been told to stay inside their homes. Many residents told news media that they heard the spray of bullets, and some said they witnessed the shooting of the officers.

Moscow, a community of about 20,000 people that is home to the University of Idaho, is located 80 miles south of Spokane, Wash.