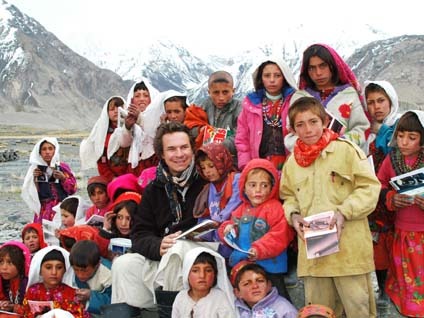 "Three Cups of Tea" author Greg Mortenson gave an exclusive interview to Outside magazine, responding to allegations in a "60 Minutes" investigation that he fabricated stories in his bestselling memoir.

Based on Mortenson's failed 1993 attempt to climb the world's second-highest peak, K2, "Three Cups of Tea" details how the author stumbled into Korphe, a remote Pakistan mountain village, and promised to return and build a school after villagers took care of him.

Mortenson claims some factual errors likely stem from his lack of journalism experience and note-taking, and the collaborative effort behind writing the book, which he co-authored with "book writer" David Oliver Relin.

"When you re-create the scenes, you have my recollections, the different memories of those involved, you have his (Relin's) writing, and sometimes things come out different. In order to be convenient, there were some omissions. If we included everything I did from 1993 to 2003 it would take three books to write it. So there were some omissions and compressions," Mortenson says in the magazine.

The author attributed the "omissions and compressions" to literary license.

He blames his naivete about writing non-fiction and inability to focus on the project on his busy schedule.

According to the Outside interview, Mortenson said the "60 Minutes" assertions that he made the trip to Korphe in 1994 instead of 1993 were "inaccurate".

Mortenson disputed claims by "60 Minutes" that his story about being kidnapped by Taliban was distorted, in that Mortenson was actually a guest of the men he claims detained him.

The author also addressed claims that some of the schools he claimed were built by his non-profit organization, the Central Asia Institute, either don't exist or were built by another organization. He said only one school in the Gultori Valley, a war zone, may not exist. While a former manager said he would start schools there, Mortenson said he was unable to visit because it's prohibited.

Mortenson also complained about the manner in which "60 Minutes" first contacted him; by calling his wife, he said.

"Most professionals would call my office or publicist first and not my wife at home," Mortenson told Outside.

Following the "60 Minutes" report, Mortenson's publisher, Viking, said it would review the contents of the book with him.

On Saturday evening, April 16, the Central Asia Institute's board of directors sent a statement to "60 Minutes," responding to questions we had asked them. Click here to read that statement.