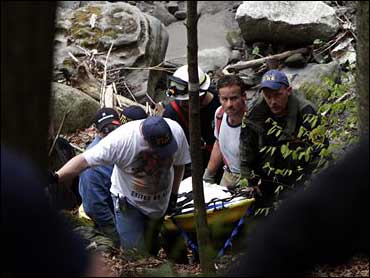 Two young brothers and a friend were found dead in a frigid river Thursday after they apparently lost their footing while playing in the fast-moving stream, authorities said.

Justin Nutbrown, 13, Joshua Nutbrown, 11, and Allison Hansen, also 11, were last seen Wednesday after school heading into the woods to play. A search began later that night, and the bodies were found Thursday morning near where the children were last seen, authorities said.

Police believe the children were attempting to cross the stream when they slipped and fell.

"I am fairly confident in saying it is my belief that this is a tragic accident," police Chief Trevor Whipple said. "Information we have seen at the scene indicates they were playing around, perhaps in the brook. The brook is lined with very slippery rocks."

Joshua was in the fourth grade and his brother was a seventh-grader. Allison, a fifth-grader, was staying at the home of the brothers.

The school system in Barre, a town of about 9,000 people, has dealt with a number of tragedies in recent years. In December 2003, a kindergartner was run over and killed by a school bus. In 2000, a high school student was murdered.

"Unfortunately, we're really good at this," Superintendent Dorothy Anderson said of her school's ability to respond to tragedy.