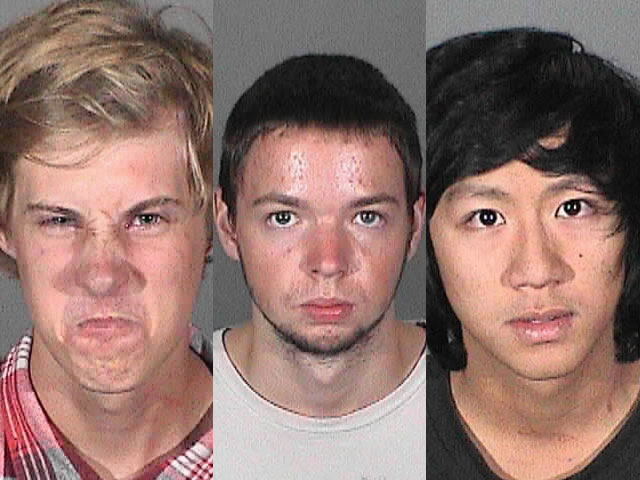 (CBS/AP) COVINA, Calif. - Three would-be beer thieves were arrested in Covina, Calif. after their bungled attempt ended with one man getting soaked in a car wash and another tackled by store employees, authorities say.

Employees reportedly managed to tackle and detain Kalscheuer while Fiumetto jumped into a car where driver Huynh was waiting. According to KCBS, an employee - who probably deserves to be promoted - was able to grab onto the hood and helped cause the driver to crash the vehicle into a curb after a 150-yard drive.

Presumably to avoid capture, Fiumetto ran into a car wash next door where police said they found him covered in soap and bubbles.

Huynh drove off but he left his wallet and ID behind. Police reportedly contacted him by phone and convinced him to turn himself in.

The three were arrested on suspicion of robbery, assault with a deadly weapon and resisting arrest.

They also provided authorities the intriguing mugshots seen above.