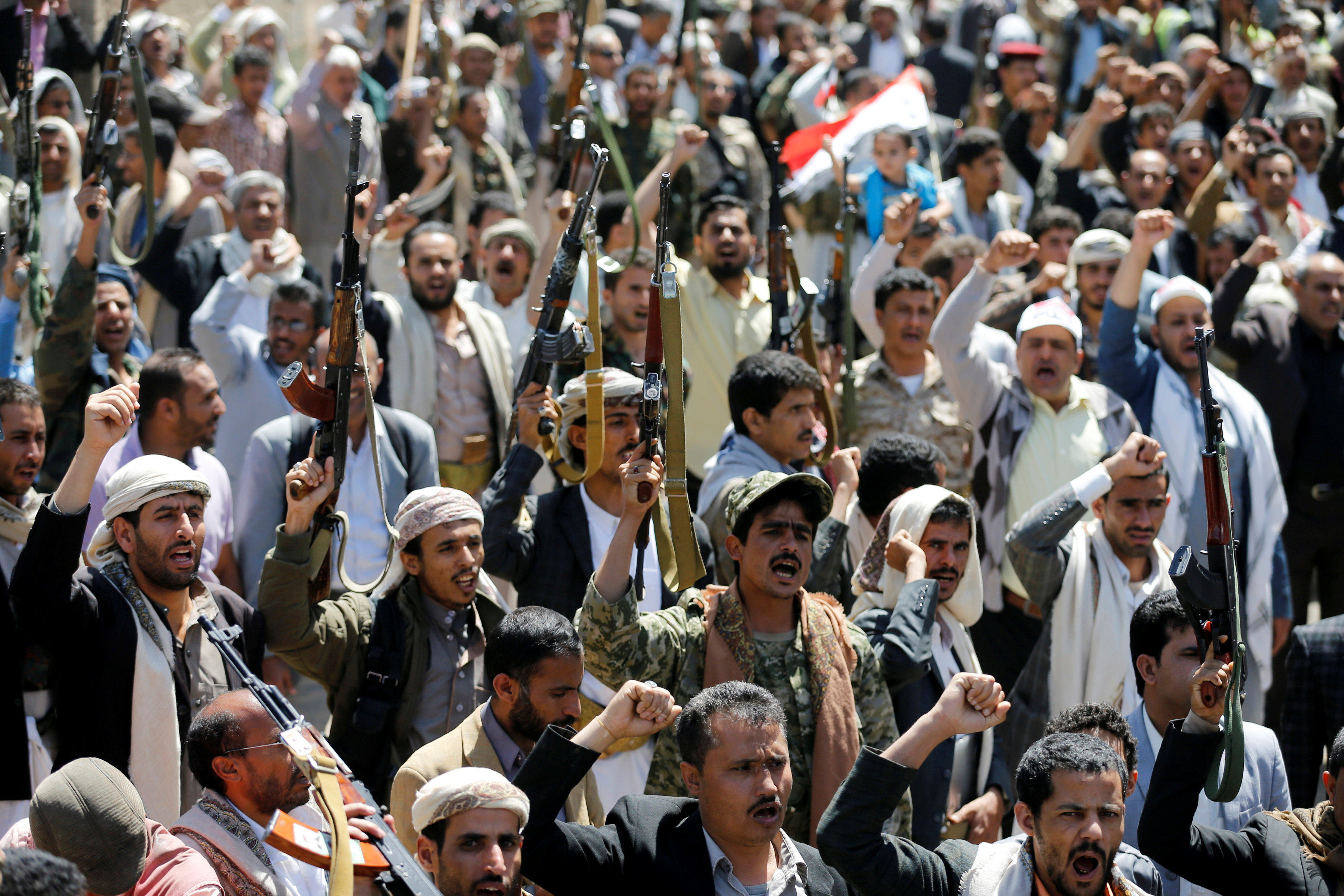 SANAA, Yemen  Iran’s foreign minister is asking U.N. Secretary-General Ban Ki-moon to use his “good offices” to arrange for an Iranian aircraft to bring humanitarian supplies to victims of the deadly attack on a funeral home in Yemen’s capital and evacuate the injured.

Mohammad Javad Zarif expressed shock Sunday at the “tragic and horrific airstrikes” by the U.S.-backed, Saudi-led coalition fighting Shiite Houthi rebels on Saturday that killed over 140 people and injured more than 525 according to the U.N.

He said the “horrendous and heinous attack” is “out of thousands” in the past 18 months that have killed or permanently injured thousands of civilians.

Zarif called for Saudi Arabia and coalition supporters to be held accountable “for the war crimes perpetrated in Yemen over the past year and a half.”

U.S. Secretary of State John Kerry in a statement reiterated the U.S.’s “deep concern about the October 8 attack on the funeral hall in Yemen that resulted in a large number of civilian casualties.”

White House spokesman Ned Price issued a caution: “We are deeply disturbed by reports of today’s airstrike on a funeral hall in Yemen, which, if confirmed, would continue the troubling series of attacks striking Yemeni civilians. U.S. security cooperation with Saudi Arabia is not a blank check.”

The humanitarian situation in Yemen has deteriorated dramatically in the last year reports CBS News’ Pamela Falk, with four out of five of Yemenis in need of assistance, according to U.N. agencies. The attack came four months after a U.N. report removed Saudi Arabia from a list of those responsible for the violation of rights of children in Yemen, under pressure from Riyad.

Saudi Arabia’s embassy issued a statement expressing “deep regret of the reported attack against the community hall of Al-Sala Alkubra in Sanaa, Yemen.” The statement also said there would be an “ immediate investigation” into the bombing.

Relations between the U.S. and Saudi Arabia have soured, since the Saudi 9/11 bill passed overriding President Obama’s veto.

Thousands of Yemenis marched in the capital Sanaa on Sunday to protest an airstrike a day earlier by the U.S.-backed, Saudi-led coalition fighting Shiite Houthi rebels, one of the deadliest single attacks in the impoverished Arab country’s relentless civil war.

The airstrike, which hit a funeral hall packed with hundreds of mourners, killed over 140 people. It was the latest in a string of bombings by the coalition that have struck hospitals, markets and other places where civilians congregate, in an effort to stamp out a rebel alliance battling the internationally recognized government of President Abed Rabbo Mansour Hadi.

The casualty toll, given by a U.N. official, also mentioned more than 525 wounded. The rebel-controlled Health Ministry gave a lower figure, saying that 115 bodies had been counted but that the number will likely rise because “charred remains” were still being identified. Of the 600 wounded it tallied, it said many cases were serious and at least 300 people needed treatment abroad.

Inside a hospital treating the wounded, survivors spoke of successive airstrikes during the funeral service, which was held for the father of an official from the rebel government controlling the capital.

“The strike hit the door, and the second fell nearly on top of us, and then the whole structure fell,” said Hasaan Nagi, who lost a leg. “I was injured in the first hit, and of course I was praying to God and then a part of the metal roof started to fall on me.”

At  the demonstration outside the U.N. building in southern Sanaa, some blamed the organization for not ending the conflict and urged an independent investigation. Others brandished automatic weapons, while rebel supporters in the crowd called on people from the region to rise up and attack Saudi Arabia.

The Saudi military announced early Sunday it would launch an investigation into “reports about the regrettable and painful bombing” in Sanaa, without acknowledging that its coalition battling rebels in Yemen is the only force with air power in the conflict.

“The place has been turned into a lake of blood,” said one rescuer, Murad Tawfiq.

Yemeni officials said the dead and wounded included military and security officials from the ranks of the Shiite Houthi rebels and their allies, loyalists of former President Ali Abdullah Saleh.

Houthi leader Abdul-Malek al-Houthi decried the attacks in a televised address, saying that they had been done with U.S. weapons and with a “green light” from Washington. Saleh also took to state TV to call on citizens to head to the Saudi border and attack soldiers there to avenge the deaths.

In the aftermath of the strike, hundreds of body parts were found strewn in and outside the hall. Rescuers collected them in sacks. The strike left the building little more than a shell, with most of its walls and roof gone. Cars parked outside were mangled by the blast.

Mohammed Abdul-Salam, the Houthi spokesman in Sanaa, angrily denounced the airstrike as the latest act of “genocide” by the Saudi-led coalition.

“The silence of the United Nations and the international community is the munition of the murderers,” he said. “Those murderers will not escape divine justice.”

In a statement early Sunday, Saudi Arabia said an investigation would be launched into the strike. Previous investigations by the Saudis have blamed Houthi or rebel forces for gathering near the sites of their attacks.

“The coalition supporting the legitimate government in Yemen has announced that it is aware of reports about the regrettable and painful bombing of the Great Hall in Sanaa today, which led to the killing and injuring of casualties, as reported,” the statement read.

It added: “The coalition confirms that its troops have clear instructions not to target populated area and to avoid civilians.”

Jamie McGoldrick, the U.N. humanitarian coordinator in Yemen, said in a statement that the relief community in the country is “shocked and outraged” by the airstrikes. He condemned the “horrific attack” and reminded all parties “that under international humanitarian law, they are obliged to protect civilians and civilian infrastructures.” He called for an immediate investigation into the incident.

“The international community must exert pressure and influence on all parties to the conflict to ensure civilians are protected,” McGoldrick said. “This violence against civilians in Yemen must stop immediately.”

Initial reports from health officials in Sanaa indicate that over 140 people were killed and more than 525 injured, McGoldrick said.

U.N. Secretary-General Ban Ki-moon condemned the bombing in a statement Sunday, saying that “any deliberate attack against civilians is utterly unacceptable ... Those responsible for the attack must be brought to justice.”

The strike also prompted outrage in Hadi’s government, with Foreign Minister Abdulmalik al-Mekhlafi taking to social media to condemn it as a “crime.”

The incident has led the U.S. to initiate an immediate review of its already reduced support for the Saudi-led coalition, White House National Security Council spokesman Ned Price said. He warned that U.S. security cooperation with Saudi Arabia “is not a blank check.”

The United States has backed the coalition with multi-billion dollar arms sales and provided logistical and intelligence support, though it reportedly began pulling some soldiers from that task in August over concerns about civilian casualties in Saudi-led airstrikes.

Kerry welcomed the Saudi commitment “to launch a thorough and immediate investigation of the strike” and reiterated the need for an immediate cessation of hostilities, Toner said. He said the Saudi Deputy Crown Prince stated his desire to institute a renewable 72-hour cease-fire as soon as possible, provided the Houthis agreed.

The Saudi-led coalition backs Hadi’s government which, together with its own allies, is fighting the Houthis and Saleh loyalists in a civil war that broke out in 2014. It’s a war largely overshadowed by the conflict against the Islamic State group elsewhere in the Middle East, though rights groups have mounted increased criticism of the Saudi-led airstrikes in recent months.

Saturday’s attack comes after a Saudi-led coalition March 15 airstrike on a market in Yemen’s northwestern city of Mastaba that killed at least 119 people. Saudi forces reportedly used U.S. munitions in that strike, which at the time was described as the second-deadliest of the Saudi campaign, after a July 2015 attack near a power plant in Mokha that killed at least 120 people.

A recent report by the U.N.’s human rights chief, Zeid Ra’ad al-Hussein, estimated that 3,799 civilians have been killed since the Saudi-led air campaign began in March of last year. The U.N. and rights groups estimate the conflict has claimed the lives of at least 9,000 people and displaced nearly 3 million more in the Arab world’s poorest country.

According to the report, coalition airstrikes were responsible for 60 percent of civilian deaths over a yearlong span starting in July last year. Just under one-quarter - 475 - civilian deaths were attributed to rebel forces like those loyal to Saleh, and another 113 to affiliates of al-Qaida and the Islamic State group.

Russia dissident jailed for 8.5 years over criticism of Ukraine war