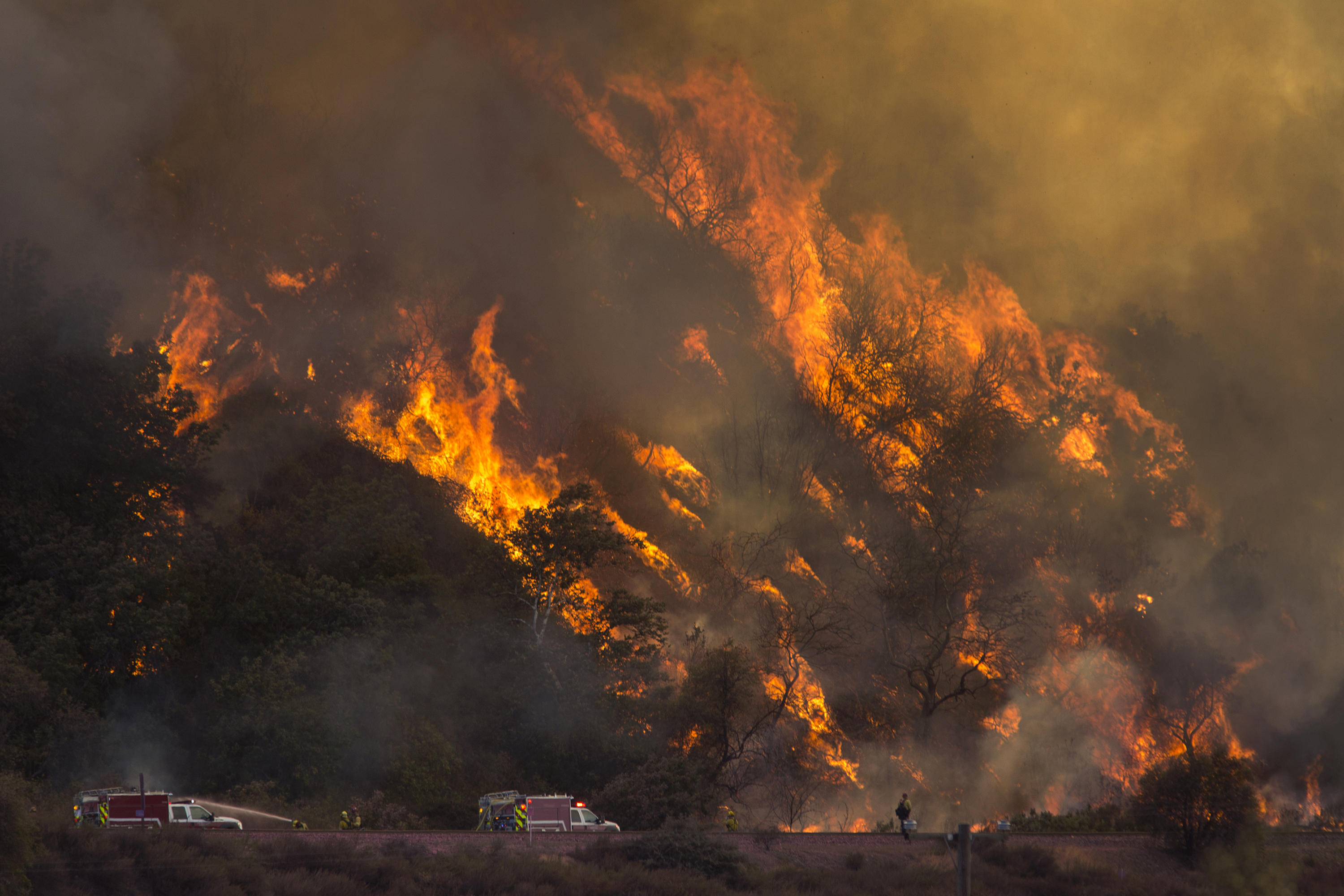 SAN BERNARDINO, Calif. – In the aftermath of a wildfire, somebody has to figure out exactly what burned. It’s painstaking and important work that helps evacuated residents know if they lost everything or have something waiting for them when they return home.

Officials estimate that at least 105 residences and 213 outbuildings have been destroyed in the massive fire that burned ferociouslythrough Southern California mountain communities this week and was still smoldering Saturday.

Fire spokesman Costa Dillon said Sunday containment of the blaze about 60 miles east of Los Angeles rose to 83 percent overnight. More evacuation were lifted for residents by the Blue Cut Fire that drove thousands from their homes.

The San Bernardino County Sheriff’s Department announced Sunday residents in the Lytle Creek area will be allowed back to their properties. Residents must show proof of residency to return.

At the height of the fire, some 82,000 people were under evacuation orders.

Most of those have now been allowed to return home, though a mandatory evacuation order remains in the El Cajon Valley area.

Fire spokesman Costa Dillon says that area is where the most active fire remains.

The Hearst Castle in central California remains closed Sunday as a result of a wildfire burning in San Luis Obispo County.

The damage numbers could rise as damage assessment teams pore through the aftermath of the blaze about 60 miles east of downtown Los Angeles, said Fire Marshal Mike Horton of the San Bernardino County Fire Department. Drought conditions in California have left plenty of fuel for wildfires.

The fire sparked Tuesday was 73 percent contained and firefighters who were on the offensive for days were finally transitioning to mop-up phase, officials said.

Operating from a mobile command center just south of the 58-square-mile blaze, Horton leads a team of 15 investigators, technicians, hazardous materials experts and others responsible for determining the extent and nature of the damages.

“We come in right on the heels of the fire,” Horton said. “Once it’s cool enough, we go parcel-by-parcel.”

Often properties are so decimated that it’s difficult to know if a smoking ash heap was a home, a trailer or a water tank, he said. Technicians consult mobile computer applications that can download geographic data and county assessors’ information to learn what might have been there before flames swept through. Numerous photos are taken and each “gets its own narrative” of what the team saw, Horton said.

Some evacuations remained in place but the majority of those ordered out were allowed to return Friday, when crews made huge gains against the blaze, fire spokesman Brad Pitassi said.

“Things are extremely positive,” said Pitassi, adding that officials expect more progress and more residents returning home throughout the weekend. At the height of the fire, some 82,000 people were under evacuation orders.

Even before they go back, anxious residents can sometimes get a sense of what awaits them thanks to reports filed swiftly by the damage assessment team. The goal is to compile the data even before the fire is fully extinguished and make them available online, via phone recordings and on postings at evacuation centers.

“Green, you’re in good shape,” Horton said Friday. “Any other color and you should be concerned.”

Johanna Santore was among those left homeless. She was running an errand Tuesday when the fire charged through her neighborhood. She tried to rush home to rescue the family’s four dogs, six cats and hamster but was blocked by closed roads.

A group of animal rescue volunteers found the house in smoldering ruins - with no signs of the pets.

“I’m actually feeling numb,” said Santore, who fled with her husband and granddaughter to an evacuation center. “It’s like a nightmare.”

A prolonged drought has transformed swaths of California into tinderboxes, ready to ignite. Six other wildfires were burning in the state, including one in San Luis Obispo County that forced the closure of the historic Hearst Castle on Saturday.

In the southern Sierra Nevada, another blaze feeding on dense timber in Sequoia National Forest forced the evacuation of several tiny hamlets.

In mountains north of San Francisco, a 6-square-mile blaze was 80 percent contained after destroying 300 structures, including 189 homes and eight businesses, in the working-class community of Lower Lake. All evacuation orders have been canceled.