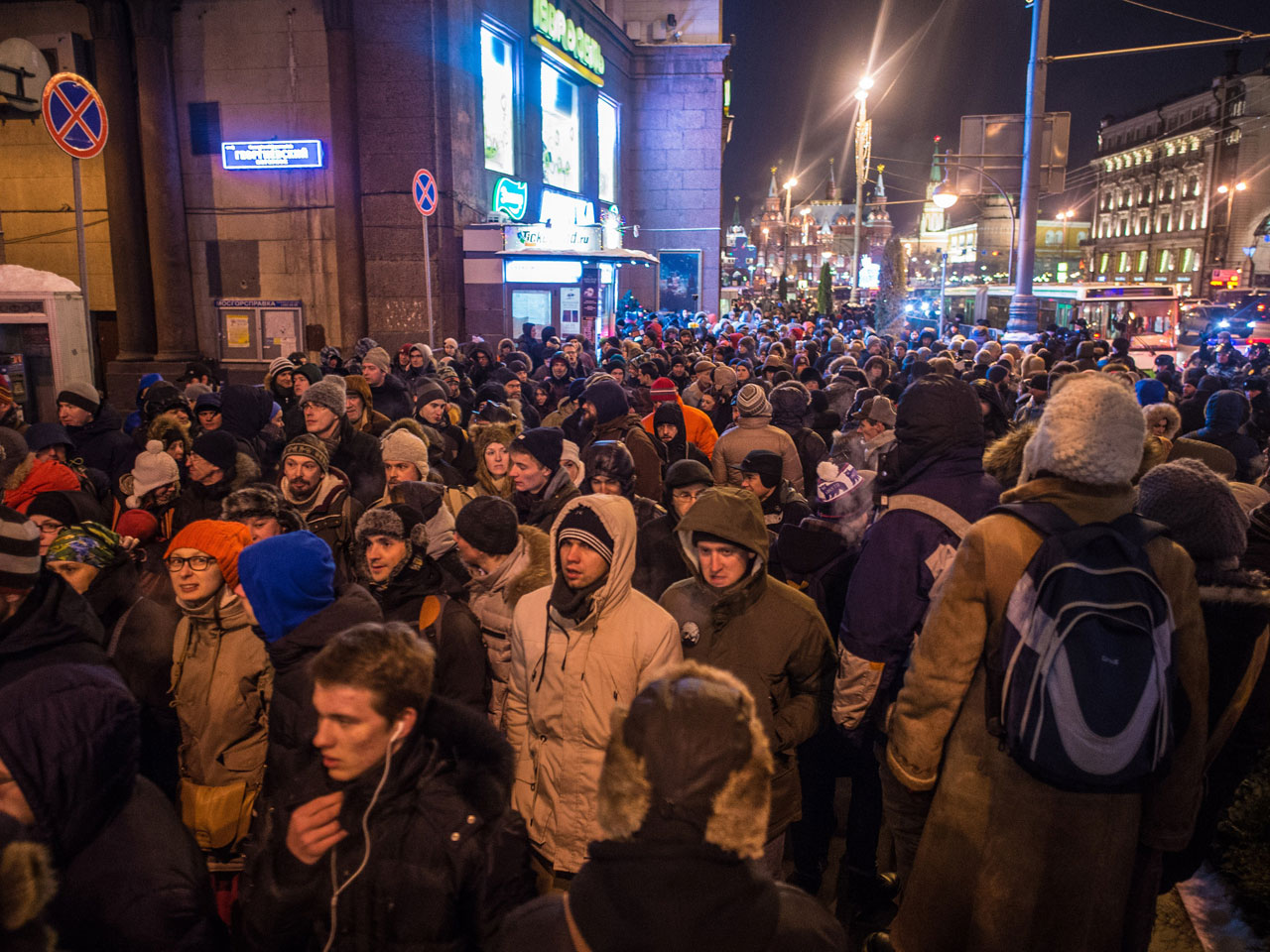 MOSCOW - Several thousand people rallied near Red Square on Tuesday to protest the conviction of the top Kremlin critic and his brother, in one of the boldest opposition demonstrations in Russia in years.

Police later pushed demonstrators away from a square just outside the Kremlin.

The unsanctioned demonstration on Tuesday came hours after Alexei Navalny, an anti-corruption campaigner and the chief foe of President Vladimir Putin, was found guilty of fraud and given a suspended sentence of 3.5 years. His brother was sent to prison.

The convictions are widely seen as a political vendetta by Putin.

Police allowed the protest in Moscow to proceed for about two hours, then moved in to push protesters away from the site.

Navalny, who has been under house arrest since February, broke its terms to attend the rally and was rounded up by police as he approached the site of the protest. Navalny later tweeted that police drove him home and blocked him from leaving his apartment.

The protesters, who gathered on the square, chanted: "We are the power!" and "You won't be able to jail us all!" Some shouted slogans of support for Ukraine, which saw its Crimean Peninsula annexed by Russia in March and has faced a pro-Russia insurgency in the east.

Alexei Mayorov, a security official in the Moscow mayor's office, had warned that any attempt to hold a rally would be quickly blocked.

Police, which have deployed in force around the central Manezh Square, rounded up some of the protesters and urged others to leave, but didn't immediately move in to break up the demonstration.

The rally has remained peaceful, despite some minor scuffles that erupted between Putin's supporters and the demonstrators.

Russian law requires demonstrators to receive official clearance for their actions and can impose heavy fines and prison sentences for those who disobey.

The provocateur punk group Pussy Riot had released a video supporting Tuesday's demonstration, featuring four stylishly dressed women sweeping snow from the square, then mounting their brooms and flying off as witches across the Kremlin wall in a performance symbolizing protest.

Two of the performers, Nadezhda Tolokonnikova and Maria Alekhina, spent nearly two years in prison on charges of hooliganism for mounting an anti-Putin protest in Moscow's main cathedral in 2012, and won global fame.

Tuesday's verdict had been scheduled for next month, but the court session was abruptly moved forward to the day before New Year's Eve, the main holiday in Russia, in what was widely seen as an attempt to head off protests. Russia's main nationwide state-controlled television stations refrained from reporting the verdict.

A European Union spokeswoman said the charges against the Navalny brothers hadn't been substantiated during trial and that the guilty verdict against them "appeared to be politically motivated."

"With the exception of a few selected representatives of the media, no public and international observers were allowed into the court building for the reading of the verdict," EU spokeswoman Maja Kocijancic said in a statement in Brussels.

"The EU stresses the importance of judicial decisions to be free from political interference, independent, and in full compliance with the rule of law," she said.

Navalny and his younger brother Oleg were convicted of defrauding a French cosmetics company and given the same 3.5 year sentence, but Oleg's was not suspended. The court also fined each of them 500,000 rubles (about $8,800) and ordered them to pay some 4 million rubles ($77,000) in damages.

Oleg Navalny, the father of two small children and a former executive of the state-owned postal service, has never played a role in the Russian opposition movement and his imprisonment could echo the Soviet-era practice of punishing the relatives of inconvenient people.

"Aren't you ashamed of what you're doing? You want to punish me even harder?" Alexei Navalny shouted out as Judge Yelena Korobchenko handed down the sentence for his brother on Monday.

He briefly entered the metal cage that his brother was put into after the verdict and appeared to be holding back tears.

"This is the most disgusting and vile of all possible verdicts," Alexei Navalny said outside the court.

"The government isn't just trying to jail its political opponents - we're used to it; we're aware that they're doing it - but this time they're destroying and torturing the families of the people who oppose them," he said, and called for people to attend the protest on Tuesday evening.

The suspended sentence means that it could be converted into a prison term at any time, by court order, in the event that Navalny offends again.

He has been under house arrest since February, and his lawyer Vadim Kobzev told The Associated Press that he will remain there until all appeals by either side are exhausted, which could take months.

Independent Moscow-based political analyst Masha Lipman said the verdict is a message to the entire Russian opposition: "All of you guys are at our mercy."

Lipman said it was clear the Kremlin had decided not to make a martyr out of Navalny, with the aim "not to consolidate the opposition, but to demoralize and intimidate it."

The trial seemed to be full of inconsistencies and loopholes.

The company involved, Yves Rocher, wrote a complaint to investigators about the Navalny brothers' firm, but its representatives have insisted throughout the trial that there never were any damages. The French executive who wrote the complaint also left Russia shortly afterward and never attended the hearings.

The prosecutors insisted that the brothers forced the company "into disadvantageous contracts" and defrauded it of 26 million rubles (about $440,000).

The brothers had both arrived at the courtroom with luggage, indicating they expected to be immediately imprisoned.

Navalny, a lawyer and popular blogger, rose to prominence with his investigations of official corruption and played a leading role in organizing massive anti-Putin demonstrations in Moscow in 2011 and 2012.

In a 2013 trial in a different criminal case, he was found guilty of embezzlement and sentenced to prison, but he was released the next day after thousands of people protested in the streets of Moscow. He was then handed a suspended sentence and finished a strong second in Moscow's mayoral election in September 2013.

The verdict and sentencing add to anxiety over the Russian economy's plunge this year.

Russian tycoon Mikhail Khodorkovsky who spent 10 years in jail before he was pardoned last year dismissed the verdict as Putin's revenge for Navalny's activism.

Khodorkovsky said in a statement that he is "not even surprised that Putin and his entourage are capable of vile tricks, deception, forgery and manipulation - they are not capable of anything else."

New York-based Human Rights Watch said the verdict sends a message "to independent voices to expect a harsher crackdown in 2015."