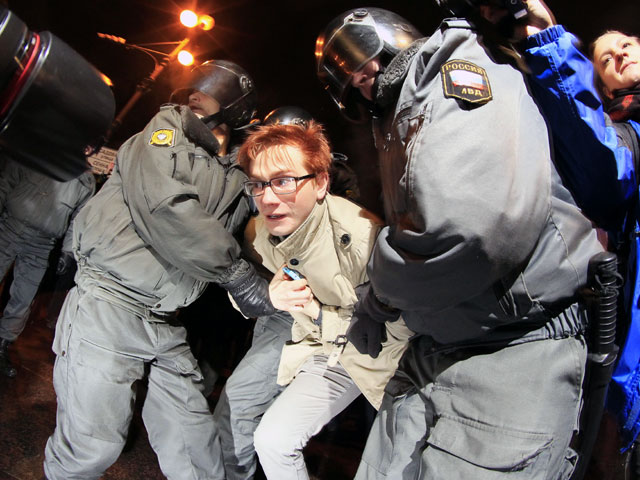 MOSCOW - Several thousand people have protested in Moscow against Prime Minister Vladimir Putin and his party, which won the largest share of a parliamentary election that observers said was rigged.

It was perhaps the largest opposition rally in years and ended with police detaining some of the activists.

A group of several hundred then marched toward the Central Elections Commission near the Kremlin, but were stopped by riot police and taken away in buses.

Estimates of the number of protesters Monday night ranged from 5,000 to 10,000. They chanted "Russia without Putin."

Putin's United Russia party took about 50 percent of Sunday's vote, a result that opposition politicians and election monitors said was inflated because of ballot stuffing and other vote fraud.

Communist chief Gennady Zyuganov said his party monitors stopped a ballot box-stuffing attempt at a Moscow polling station where they found 300 ballots already in the box before the start of the vote. He also said there were several other incidents of ballot-stuffing reported in other areas. People posing as Communist monitors had shown up at Krasnodar polling stations and the real observers from the party weren't allowed in, Zyuganov added.

Exit poll results also showed that Putin's party was having a hard time getting 50 percent of the vote. Opponents claimed that even that number was inflated.

Earlier Monday, Secretary of State Hillary Clinton said that the United States had "serious concerns" about the veracity of the elections. She spoke in Bonn, Germany, adding that the international community has echoed the U.S. concerns and believes there may have been possible ballot-stuffing, manipulation of voter lists "and other troubling practices." She also added that there were several reports of Russian election monitors being harassed, including through attacks on their web sites.