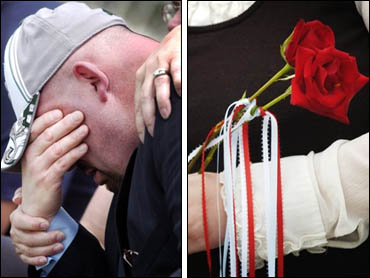 Over 10,000 people packed the church and nearby stadiums Tuesday to participate in funeral services for the Rev. Jerry Falwell, eulogized as a champion of conservative Christian values who turned the religious right into a powerful force in American politics.

While Falwell's influence in the political arena will always be part of his legacy, there was one group noticeably absent from Tuesday's ceremony: presidential candidates.

The funeral returned Falwell to his roots - the Thomas Road Baptist Church, where he started as a young preacher in 1956 with just 35 parishioners in an abandoned soda bottling plant.

"He was a champion of the fundamental values that we hold dear," fellow evangelist Pat Robertson said as he entered the sanctuary. "He stepped on some toes."

The rise of Christian conservatism - and its condemnation of homosexuality, abortion and pornography - made Falwell perhaps the most recognizable figure on the evangelical right.

His sharp comments and criticisms also made him among the most controversial of the religious right wing's leaders. After the Sept. 11, 2001, terrorist attacks, Falwell said abortionists, feminists, gays and others "have tried to secularize America... helped this happen."

Tuesday's funeral service was mainly peaceful, although it did attract a handful of protesters. Police said 19-year-old Mark David Uhl, a student at Liberty University - founded by Falwell - was arrested after several homemade bombs were found in his car. Uhl planned to attend the funeral, authorities said, but they do not believe he planned to disrupt the event by using them.

Police say he has been charged with manufacturing an explosive device.

Investigators suggested that Uhl had problems with the Kansas-based Westboro Baptist Church, which sent about a dozen protesters who claimed Falwell was a friend of gays. The church has picketed U.S. soldiers' burials across the United States, claiming the deaths are God's punishment for a nation that harbors gays. It was unclear whether Uhl was involved with a counter-protest organized Tuesday by university students.

Falwell, 73, died a week ago after collapsing in his office at the university. His physician said Falwell had a heart condition and presumably died of a heart rhythm abnormality.

Speakers remembered Falwell the politician, who became a force in the Republican Party in the 1980s after starting the Moral Majority and organizing the conservative Christian vote to send Ronald Reagan to the White House.

"He said, 'I believe God has called me to confront the culture,' and did he ever confront it," said the Rev. Jerry Vines, former president of the Southern Baptist Convention.

Falwell's opposition to abortion led him to get involved in politics.

The Rev. Franklin Graham, son of evangelist Billy Graham, said he had been asked whether he agreed with Falwell. He drew applause with his response: "Every time he opened the Bible, I agreed with Jerry Falwell."

Even as a young preacher, Falwell broke new ground, launching television evangelism with the "Old Time Gospel Hour" in 1956. He built the Thomas Road Baptist congregation to an estimated 24,000 over the years by knocking on doors and listening to the people who answered.

The White House was represented by Tim Goeglein, who told the crowd Falwell was "a great friend" of the administration.

More than 33,000 people had viewed Falwell's body over four days as it lay in repose.

A private burial was planned on the grounds of Liberty University.