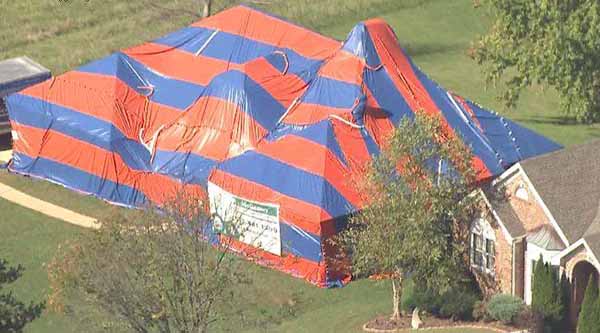 WELDON SPRING, Mo. -- A family was driven from their suburban St. Louis home by thousands of venomous spiders that fell from the ceiling and oozed from the walls.

Brian and Susan Trost bought the $450,000 home overlooking two golf holes at Whitmoor Country Club in Weldon Spring in October 2007 and soon afterward started seeing brown recluse spiders everywhere, The St. Louis Post-Dispatch reported. Once when showering, Susan Trost dodged a spider as it fell from the ceiling and washed down the drain.

An expert on brown recluse spiders told CBS affiliate KMOV-TV that the creature's bite can be very serious depending on how much venom is injected.

"It's not going to kill you, but it will make you wish you were dead," said Jamal Sandidge with the University of Kansas.

Susan Trost told KMOV-TV in 2012 the spiders "started bleeding out of the walls," and at least two pest control companies were unable to eradicate the infestation.

The couple filed a claim in 2008 with their insurance company, State Farm, and a lawsuit against the home's previous owners for not disclosing the brown recluse problem.

At a civil trial in St. Charles County in October 2011, University of Kansas biology professor Jamel Sandidge - considered one of the nation's leading brown recluse researchers - estimated there were between 4,500 and 6,000 spiders in the home. Making matters worse, he said, those calculations were made in the winter when the spiders are least active.

The jury awarded the couple slightly more than $472,000, but the former owners declared bankruptcy, the insurance company still didn't pay anything and the couple moved out two years ago.

The home, now owned by the Federal National Mortgage Association, was covered with nine tarps this week and workers filled it with a gas that permeated the walls to kill the spiders and their eggs.

"There'll be nothing alive in there after this," said Tim McCarthy, president of the company hired to fix the problem once and for all.

McCarthy told KMOV that said there is a reason why one home may be infested even though nearby homes are not.

"Many times people bring them in, you can move from a house that has them. You buy things at an auction, you have furniture in storage, many times brown recluse spiders are carried right into the house," he said.