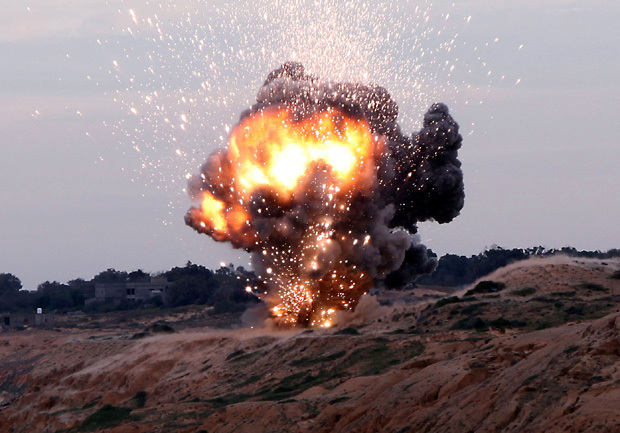 The U.S. has been unable to secure thousands of potentially dangerous shoulder-fired missiles known as "MANPADS" that were leftover from the Qaddafi regime in Libya, CBS News has learned.

MANPADS stands for "Man-portable air-defense systems." According to a well-placed source, hundreds of the missiles have been tracked as having gone to Al Qaeda Islamic Maghreb (AQIM), an Algeria-based Sunni Muslim terrorist group fighting for control in Mali.

"I would imagine they're trying to get their hands on as many weapons such as MANPADS as they can," says CBS News national security consultant Juan Zarate. "It's a danger both to the military conflict underway in Mali and a real threat to civilian aircraft if, in fact, terrorists have their hands on these MANPADS."

Before his overthrow and death in the fall of 2011, Libyan dictator Muammar Qaddafi was believed to have purchased 15,000-20,000 Soviet MANPADS. Concern over the whereabouts of the missiles - and the possibility that terrorists could buy them on the black market and even use them to shoot down American passenger jets - drove a U.S. effort to recover as many as possible. But only about 2,000 were accounted for prior to the Sept. 11, 2012 terrorist attacks on Benghazi, Libya, according to the source. He describes those working to locate the missiles as "beside themselves" and "frustrated."

The program to recover MANPADS in Libya was funded by the U.S. and said to have been run by South African contractors. The contractors attempted to appeal to Libyans, many of them ex-Gaddafi loyalists, to turn over or destroy the MANPADS as a matter of patriotism and pride.

"We told them that 'if planes start dropping out of the sky, it will trace back to you and you'll have the international reputation for terrorism,'" says the source. "We offered them money, we tried talking them out of it ... The only successes they had were in western Libya, the Tripoli area. In the eastern half toward Benghazi, they were getting nowhere."

Recovering MANPADS that have left official state custody is "almost a 'mission impossible' task," says Lincoln Bloomfield Junior, who led a program under the Bush Administration to recover the weapons worldwide.

In the case of Libya's missing MANPADS, there was also concern they would get into the Syrian conflict. "Once they start getting sold on the black market, we can't control them," says one source.

The source added he's unaware of any U.S. attempt to send recovered Libyan MANPADS to arm Syrian rebels seeking to depose President Bashar al-Assad. The idea is impractical, he says, because relatively few weapons were located. Also, the functionality of the MANPADS is uncertain because Qaddafi stored them in bunkers throughout Libya that did not have necessary temperature controls.

The Path Out of Libya

While recovery efforts failed to bring desired results in Libya, intelligence sources have tracked some of the MANPADS to other destinations. One of the missiles was observed in a test-firing in the southern Sahara: the missile only reached 40-50 feet before fizzling out. Israeli intelligence confirmed some were going into Syria. Others were photographed being loaded on trucks before heading into Algeria, where AQIM is based. And "hundreds" were tracked to AQIM in Mali. "From there, they could have gone to other places in Africa," the source told CBS News.

"This is one of those scenarios that we have dreaded," says Zarate, a former Bush National Security Advisor. "You have stockpiles and availability of these weapons in an environment where a terrorist can readily get access to them... It's a serious concern."

That's why, the well-placed source tells CBS News, U.S. officials were so worried in February, 2012 when four U.S. servicemen were killed in a reconnaissance plane crash in the Horn of Africa. The cause was under investigation, but the Pentagon released a statement saying that hostile fire was not suspected.

For any MANPADS - let alone hundreds - to end up in AQIM's hands is a dangerous prospect. Last Sunday, AQIM issued a new statement that calls upon North African youths to fight secularists at home and wage jihad in Mali. Following the terrorist group's formal alliance with al Qaeda in 2006, AQIM announced its goal of attacking Western targets.

Since then, it has bombed convoys of foreign nationals and the U.N. offices in Algiers; attacked the Israeli Embassy in Nouakchott, Mauritania; and launched suicide bomb attacks. In 2009, the group said it was responsible for killing American Christopher Leggett in Mauritania because of his missionary activities. In 2012, AQIM took advantage of political chaos in northern Mali to consolidate its control there.

A French hostage kidnapped in November 2011 was reported executed in Mali late Tuesday, but the report hasn't been independently confirmed. AQIM has claimed responsibility for the kidnappings of six French nationals in North Africa.

For U.S. officials, the biggest fear is that terrorists or drug cartels would acquire black market MANPADS and use them in South America or even in the U.S. That was the burden borne by Ambassador Bloomfield in the mid 2000's. At that time, Bloomfield says there were estimates of upwards of a million MANPADS in the world. Most were presumed to be in "responsible military hands." However, an undisclosed number was known to be in countries under little to no official control.

During the Iraq surge, Bloomfield says many pilots sighted shoulder-fired missiles being launched at them. In 2007, he says the terrorist group al Shabaab in Somalia used a very sophisticated MANPAD to shoot down a U.N. transport plane and posted video of it on the Internet.

"These are missiles that can hit an airplane from any angle. They don't have to be lined up behind the head of the engine. They can reach 10,000 feet," says Bloomfield.

More recently, a source who was on the ground in Libya says Mexican crime syndicates were looking for MANPADS to purchase there.

"I don't think we should be alarmist without more specific data," Zarate tells CBS News, "but this has always been a concern for civil aviation, evidenced by fact that we have a Special Envoy for these things."

Bloomfield's role as Special Envoy for MANPADS Threat Reduction was to convince people to give up the weapons for destruction. He and his teams offered incentives such as stockpile security upgrades, experts who could help weed out dangerous munitions that could cause accidental disasters, fencing, locks and cameras. The programs "did have a positive impact," Bloomfield says. However, due to diplomatic tensions at the time, he never made it to Libya.

Commercial airlines could be armed with expensive countermeasures to defend against a MANPADS attack, says Bloomfield, but the idea hasn't proven practical. One problem is that aircraft armed with such technology would be targets for foreign interests who want to steal it.

Bloomfield says it would change the way Americans travel as much, if not more, than did the 9/11 attacks.

"A genie would come out of the bottle that would be so regrettable in so many respects," he said, "the only answer is to keep running as hard as you can to keep it from happening."