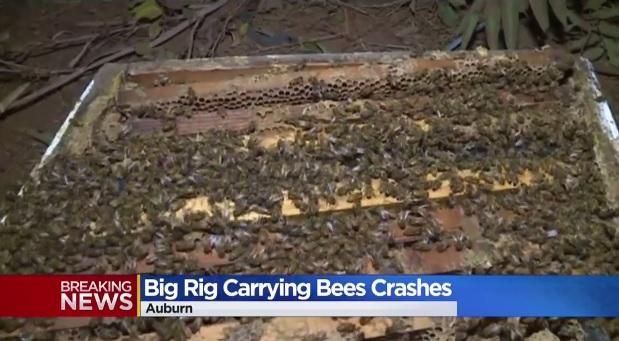 AUBURN, Calif. -- Thousands of honey bees were killed when a semi truck crashed after avoiding a slow down on a freeway in California.

Police said traffic quickly backed up and the driver had to ditch the freeway, which caused the fatal accident for the honey bees. Boxes of beehives were crushed and the driver was sent to the hospital.

"When they have an impact like that, they are usually sprung or damaged and really hard to salvage," said John Miller, a beekeeper in Newcastle.

He heard the news and quickly came to assess any chance of survival.

The Auburn Fire Department was forced to drown the bees, which created a dangerous situation for the public. Miller said he'd seen this happen before and there were no other options.

"It's a loss for the owners of the bees and it's a tragedy for the hives themselves. These bees were destined to do some pollination work next spring, fruits, vegetables, nuts. It's a tragedy, it's sad," he said.

If the crash were to have happened during the day, Miller says there might have been a better chance for survival.

The mess ultimately took hours to clean up. Authorities said the crash could have been an absolute disaster had the driver not bailed off of the freeway.

The cause of the crash remains under investigation.