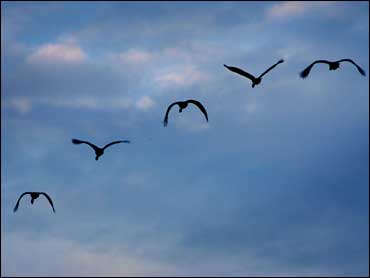 Wildlife authorities investigating why thousands of birds fell from the sky over a town in remote southwestern Australia have ruled out infectious diseases but are no closer to figuring out what killed them, a state official said Friday.

Around 5,000 birds have been found dead in Esperance, Western Australia since mid-December, according to Nigel Higgs, spokesman for the state's Department of Environment and Conservation.

The birds were mostly nectar- and insect-eating species, although some seagulls also have been found, Higgs said in a telephone interview from his office in the Western Australia capital, Perth.

Pathologists at the Western Australia Department of Agriculture examined several of the carcasses, and have ruled out the virulent H5N1 bird flu virus and other infectious diseases.

"It may be an environmental toxin. It may be an agricultural or industrial toxin. We just can't be specific," Higgs said.

Further tests were being done on the dead birds, and Higgs said that it would be at least another week before pathologists have any more information on the mysterious deaths. Meanwhile, the reports of dead birds were waning, he said.

The government order followed the deaths of 750 chickens Wednesday and Thursday at a farm in the town of Kiyotake in Miyazaki prefecture (state), an Agricultural Ministry official said on condition of anonymity, citing protocol.

The results of a preliminary bird flu test came back positive early Friday evening, said prefectural official Masao Tanaka, but he cautioned that the final results would not be known until at least early Saturday.

Bird flu is generally not harmful to humans, but the H5N1 strain of the virus has claimed at least 157 lives worldwide since it began ravaging Asian poultry farms in late 2003, according to the World Health Organization.

Around 1,600 more chickens had died by early Friday evening, bringing the total to about 2,400, Tanaka said.

The government has set up a task force and ordered 20 poultry farms within a 6.2-mile radius of the affected operator to halt shipments of eggs and chickens for the time being, said Toru Inoue, another prefectural official.

Environment officials are also to conduct a national survey to look into the possibility that a bird flu virus might have been brought by migratory birds from other parts of Asia.

Authorities will take further epidemic prevention procedures if the test confirms bird flu at the farm, including destroying the remaining birds, he said.

In Indonesia, one of two women diagnosed with bird flu died and the other was reported in critical condition on Friday, part of a new spate of cases ending a lull in the country where the virus has claimed the most lives.

A teenage boy also died of the disease earlier in the week, the first fatality in six weeks.

The deaths brought the number of people killed by bird flu in Indonesia to at least 59 since the virus began ravaging Asian poultry stocks in 2003. The Indonesian deaths account for more than a third of the world's total.

"Indonesia has been on the right track in handling the bird flu, but the danger still exists," said Bayu Krisnamurthi, head of the country's bird flu commission.

All three cases occurred in the industrial town of Tangerang to the west of the capital, Jakarta.

The 37-year-old woman died late Thursday in a Jakarta hospital that is also treating her husband and 18-year-old son for symptoms of the H5N1 virus, said Haris Sugiantoro of the Health Ministry's bird flu information center.

Tests have confirmed that a 22-year-old woman also is suffering from the virus, said Joko Suyono, another official at the center. Neighbors said they saw her pick up a chicken that had died nearby.

On Wednesday, a 14-year-old boy also from Tangerang died after being treated for four days at the same hospital. His death ended a pause that had led Indonesian officials to say they were making progress in the fight against the disease.

The virus remains hard for humans to catch and kills a tiny percentage of the hundreds of thousands of people who die each year in developing countries from easily preventable diseases.

But international experts fear it may mutate into a form that could spread easily between humans and potentially kill millions around the world.

Earlier this week, authorities discovered 63 dead birds in a section of downtown Austin, Texas, and temporarily shut down the area. Officials are awaiting lab results to determine the cause of the deaths.