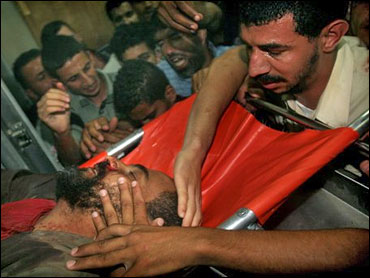 Tens of thousands of Palestinians, some firing in the air and calling for blood, flocked to a Gaza Strip stadium on Friday to bury the highest-profile militant commander that Israel has killed in four years.

Jamal Abu Samhadana, recently tapped as the Hamas government's security chief, died Thursday in an Israeli air strike on a militants' training camp in southern Gaza. Hamas, sworn to Israel's destruction, has interpreted the attack as an assault on its government, and has warned Israel that Abu Samhadana's death would be avenged.

The Hamas-led Palestinian government had recently appointed Samhadana to head a new security force, though he is a member of another group, reports . Israel said he was a key player in rocket attacks and behind the bombing of a U.S. diplomatic convoy three years ago that killed three American security guards.

No Rafah mosque could accommodate the thousands who turned out for the funeral prayers, so a makeshift mosque was set up at the local stadium. Prayer rugs were laid out on the grass, and a stage was built for the preacher to deliver the Friday sermon.

Hundreds of gunmen escorted Abu Samhadana's body from the morgue to his house, and then through the streets of Rafah on the way to the stadium. They fired thousands of bullets in the air, chanting, "God is great" and "Revenge, revenge."

Masked gunmen affiliated with Palestinian President Mahmoud Abbas' Fatah party pulled up at the stadium in a car with six rocket launchers and six homemade rockets ready to be fired. Other gunmen from the different Palestinian militant factions were armed with assault rifles, rocket-propelled grenades, and hand grenades.

Black PRC flags and green Hamas flags hung on the stadium's outer walls. A giant poster of the Al Aqsa mosque in Jerusalem, one of Islam's holiest shrines, was hung near the stage.

The prayer service proceeded quietly, and afterward, mourners streamed out of the stadium to the cemetery where Abu Samhadana was buried. Dozens of gunmen in the procession fired bullets in the air and some people chanted "God is great," and "We are ready to redeem you with our souls and our blood."

A cactus was planted on his fresh grave.

Abu Samhadana's wife, Ahlam, and mother of his five children was in Egypt when her husband was killed shortly before midnight on Thursday. She arrived back in Gaza on Friday morning.

"I am proud to be the wife of the martyr Abu Samhadana," said his wife of 13 years. "God willing, his children will follow in his journey on the path of the holy war."

Abu Samhadana was the most powerful militant chief killed by Israel since it dropped a one-ton bomb on the house of Hamas commander Salah Shehadeh in July 2002. The funeral was the largest in Gaza since Hamas leader Abdel Aziz Rantisi was killed in an Israeli airstrike in April 2003.

Abu Samhadana, 43, and other militants had been about to enter a PRC training camp in the former Jewish settlement of Rafiah Yam when four missiles struck, killing him and three other militants, and wounding 10.

The Israeli military said it hit the camp in southern Gaza because militants there were planning a large-scale attack on Israel. It would not confirm or deny that it had targeted Abu Samhadana, the No. 2 man on Israel's wanted list.

As a key Israeli target, Abu Samhadana had moved stealthily, switching cars and hideouts. Just a few days before his death, he told The Associated Press in a back alley interview that the U.S. government and its people would "pay a dear price" for leading bruising economic sanctions against the Palestinian Authority Hamas' refusal to disarm and recognize Israel.

He said he had security measures in place against Israeli attack. "They don't catch me. I hunt them," he boasted.

Israeli police spokesman Micky Rosenfeld said Friday that security officials were aware of threats of revenge, and were taking general precautions. He did not elaborate.