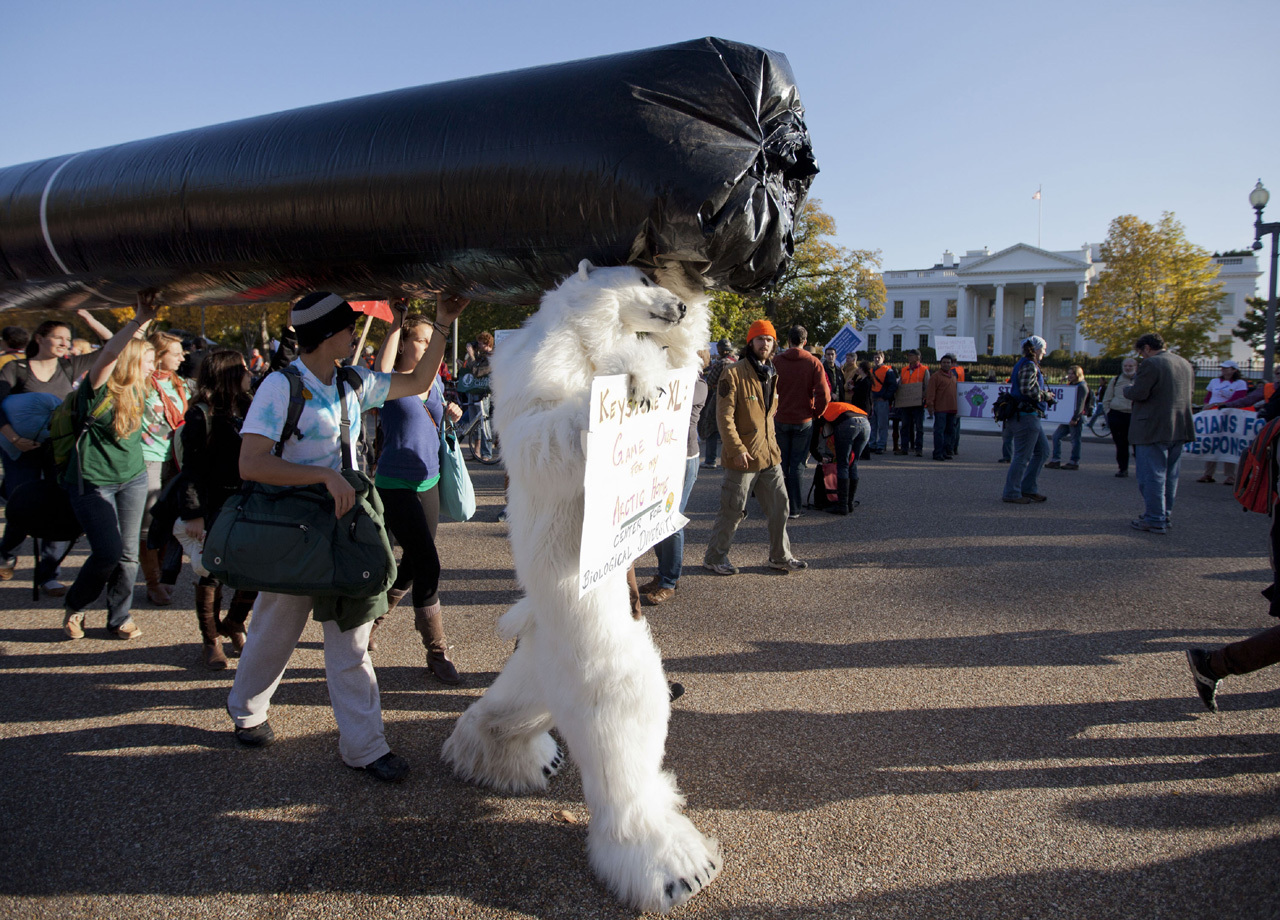 WASHINGTON - Thousands of protesters, including a Nobel laureate and a movie star, gathered near the White House on Sunday in opposition to TransCanada's Keystone XL pipeline.

The demonstration is the latest in a series of White House protests aimed at convincing U.S. President Barack Obama to block the $7 billion project that would carry Alberta oilsands crude through six American states to Gulf Coast refineries.

Mark Ruffalo, nominated for an Academy Award last year, and Jody Williams, winner of the 1997 Nobel Peace Prize for her work on banning landmines, were among the celebrities who intended to join hands and encircle the White House despite the fact that Obama was golfing in northern Virginia on a stunning autumn afternoon.

"I'm here to get a message to President Obama to stop the tarsands, Keystone XL pipeline," Ruffalo told The Canadian Press.

"I voted for him because he promised us change and he promised us we were going to be the generation to end tyranny, and now is his chance to come through."

Canadian actress Margot Kidder, arrested at a summer White House anti-Keystone protest, was back on Sunday amid thousands of peaceful protesters who waved banners and chanted anti-pipeline slogans across Pennsylvania Avenue from the presidential residence.

"I have heard he's gone golfing but he has to drive through the wonderful circle to get back to his house, so that's perfect," she said.

The Obama administration is currently weighing whether to give the green light to Keystone XL.

The U.S. State Department is making the ruling because the pipeline crosses an international border, but the president has said the final decision will reflect his views and suggested he isn't swayed by the argument that the pipeline will create jobs.

"Folks in Nebraska, like all across the country, aren't going to say to themselves, 'We'll take a few thousand jobs if it means our kids are potentially drinking water that would damage their health,"' Obama said in an interview with an Omaha TV station.

"We don't want, for example, aquifers to be adversely affected. Folks in Nebraska obviously would be directly impacted."

A decision on the pipeline was supposed to be made by the end of the year, but the State Department suggested last week that it might defer the decision as they continue to assess whether Keystone XL is in the national interest of the United States.

Keystone XL has become a political hot potato for the Obama administration, especially since the release of emails that suggest a cosy relationship between State Department officials and TransCanada's chief lobbyist, Paul Elliott.

There have also been allegations that the State Department failed to do an impartial environmental assessment of Keystone XL by hiring an environmental consulting firm, Houston-based Cardno Entrix, recommended to it by TransCanada itself.

With a presidential election less than a year away, key Obama advisers are reportedly growing increasingly nervous about losing supporters if they approve Keystone XL.

The pipeline's opponents point to a series of recent spills along oil pipelines and argue the Keystone XL project is a disaster waiting to happen as it would carry millions of barrels a week of carbon-intensive oilsands crude through environmentally fragile areas of the U.S. Great Plains.

The project has not only become a symbol of the increasingly heated debate in the United States about the country's reliance on fossil fuels and a perceived reluctance to embrace renewable sources of energy, but also the distrust many Americans feel towards big corporations.

"You can't occupy the White House, but you can surround it," Bill McKibben, a leading U.S. environmentalist and one of the protest's organizers, told a news conference last week.

Keystone XL has become a flashpoint for the environmental movement in the U.S. following last year's failed federal climate change legislation. More than 1,000 protesters were arrested this summer in two weeks of sit-ins outside the White House.

The Nebraska legislature, meantime, is in special session considering legislation that could force TransCanada to reroute the pipeline away from the Ogallala aquifer, a major source of drinking water for the region.