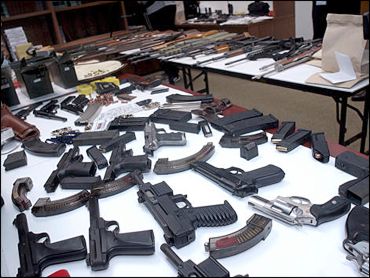 More than 7,000 people who should have been barred from buying guns were able to buy them anyway in 2002 and 2003, according to a Justice Department review released Monday.

The government rarely prosecutes such cases, the report said.

Federal law stipulates that gun buyers might have to wait up to three business days before receiving their weapons; under a system of instant FBI background checks instituted in 1998, most sales are approved much more quickly. Of the 17 million gun purchases in the last two years, 122,000 were denied because of the checks.

If the background check isn't completed within the period, however, the law says the purchase must go through. In 2002 and 2003, there were a combined 7,030 "delayed denial" cases in which the FBI found that a prohibited person was able to get a gun after the period expired, according to the review by Glenn A. Fine, the Justice Department's inspector general.

The Bureau of Alcohol, Tobacco, Firearms and Explosives retrieved the weapon in 97 percent of those cases. That sometimes took a year or longer, ample time for an illegal buyer to use the gun to commit a crime.

The study did not say how many times that occurred but provided some examples, including an instance in which a prohibited buyer was charged with aggravated assault after firing the illegally purchased weapon at another person's car.

Several reasons were cited by ATF for its failure to retrieve the guns more quickly, including staffing shortages, technology problems and lack of adequate timeliness standards. The review also found that ATF agents did not consider it a priority to track down the illegal gun purchasers because they are not viewed as dangerous.

"We were also told that 'bad guys' generally do not purchase their firearms through legitimate dealers" but instead do so illegally, at unregulated gun shows or flea markets or through other means, the review said.

The study also found that federal prosecutors brought charges in only 154 of the 122,000 illegal purchase cases.

Many U.S. attorneys believe cases are difficult to bring to a jury, the review said, partly because a denial can occur because of seemingly minor offenses that happened long ago. Examples include a man who had stolen a pig in 1941, a person convicted of check forgery in 1959 and someone with an attempted burglary conviction dating to 1963.

Fine said in the study, however, that "because someone has committed only nonviolent crimes in the past does not mean that he or she is not capable of using the illegally obtained firearm to commit a violent crime."

The review was the second in as many weeks by Fine that was critical of the ATF, which last year moved from the Treasury Department to the Justice Department. A review last week said the ATF was unable to meet its own annual goals for checking that the nation's gun dealers comply with federal firearms laws.

The three-day waiting period for buying weapons, established by Congress in 1993 in the Brady Act, was meant to ensure that fugitives, people convicted of past crimes, illegal aliens, people involved in domestic violence, drug addicts and others cannot buy guns from federally licensed dealers. Those dealers are required to submit forms to the FBI's National Instant Criminal Background Check System before any weapon can be bought.

As of June, the review found a backlog of 2,819 standard denial cases — those in which the illegal purchaser tried and failed to get a gun — that the FBI had referred to the ATF for investigation.

In a written response, ATF Director Carl Truscott said he agreed that "general timeliness standards" should be adopted and that his agency is moving to ensure that agents react faster and document gun retrieval cases more meticulously.

Truscott also said that ATF is seeking more money from Congress for its firearms investigations and is working to implement many other management recommendations contained in the Justice Department review.

Mary Beth Buchanan, director of the Executive Office for U.S. Attorneys, said federal prosecutors have been instructed to ensure their guidelines reflect a June 2001 directive from Attorney General John Ashcroft, which mandated that gun background check violations be considered a priority for law enforcement.