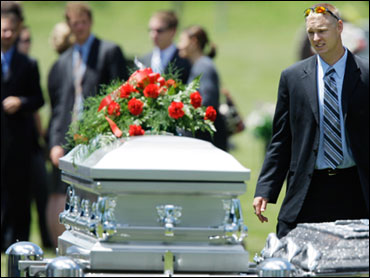 PARKERSBURG, Iowa (CBS/AP) Thousands of mourners gathered Monday to remember a slain high school football coach as a man of faith who believed in leading by example.

Family, friends and former players packed into a church, community center and parking lot for the funeral for Ed Thomas, the 58-year-old longtime coach at Aplington-Parkersburg High School who was gunned down Wednesday in the school weight room.

Pastor Brad Zinnecker of First Congregational Church said the huge turnout was a testament to Thomas' faith. "They recognized a man after God's own heart," Zinnecker said. "His personal life and public life were one and the same." 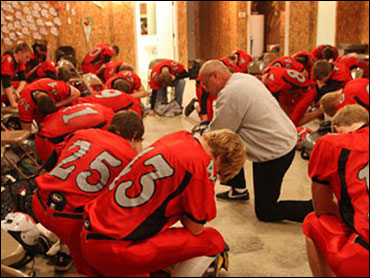 The number of mourners easily topped the roughly 1,800-person population of Parkersburg as people filled the church, watched a broadcast of the funeral in the community center and spilled into a parking lot to listen to the service.

Mark Becker, a 24-year-old former high school football player, is accused of killing Thomas. He was released from a psychiatric ward a day before the shooting, and was arrested days before that after allegedly threatening a Cedar Falls homeowner with a bat and leading police on a high-speed car chase.

Thomas died at a Waterloo hospital. His shooting stunned the rural community 80 miles northeast of Des Moines, and reverberated through NFL circles, where he was remembered as much for his faith as his winning record.