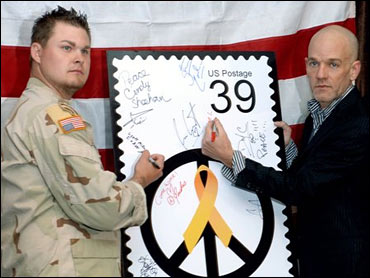 Michael Stipe, Susan Sarandon, Cindy Sheehan and others marked the third anniversary of the U.S.-led invasion of Iraq with a concert to benefit groups campaigning against the war.

"I was raised by peace activists," Moby announced to the crowd at Hammerstein Ballroom from a stage flanked by two oversized peace symbols. He then accompanied Laura Dawn in a rendition of Buffalo Springfield's Vietnam-era song, "For What It's Worth."

Sheehan, whose son was killed in Iraq, gained international attention last summer with her protest outside President Bush's Texas ranch.

"It's awesome to me because there are more and more kids getting involved," Sheehan said before the concert.

Sarandon said artists were playing their part in the anti-war effort by attending the concert and through the movies Hollywood is producing.

"Look at 'Syriana,' look at 'Good Night, and Good Luck,"' Sarandon said of two recent films that deal with issues of war and censorship.

The actress, who said she was in talks to portray Sheehan in a film, said the activist "gave a face to all that was going on."

Profits from the concert are earmarked for anti-war groups including Gold Star Families for Peace, which counts Sheehan among its founding members, and Veterans Against the War.