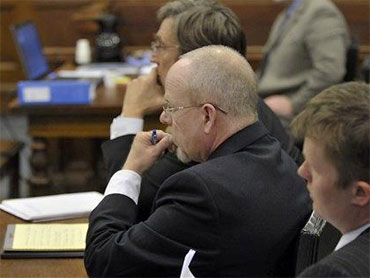 "Mildred "Millie" McWilliams Jeffrey retired this week," the Detroit News reported. Actually Millie Jeffrey passed away on Wednesday, but since she told the paper in 2000 when President Clinton presented her with the Medal of Freedom that she'd retire "when she died" the words were sadly accurate.

Millie was a 93-year-old dynamo and until a few months ago was still flying back and forth from her home in Detroit to Washington D.C. and points east and west to stir the pot, foment change and warm our hearts.

Last May, she came to D.C. to review the Democratic presidential candidates who were speaking at Emily's List, one of many organizations she helped start to further the course of women in politics. She was a reader of this column and, now it can be revealed, a trusted source. Mille had an agenda but was as shrewd a political analyst as they come, and often gave me insights into what was "really happening" behind the scene in politics.

Millie was a rabble rouser for most of the Twentieth Century. In college in the 1920s, she joined a branch of the YMCA that sponsored interracial dances. She organized textile workers in the South in the 1930s until she was run out by the KKK.

In the 1940s she became the first director of the Women's Bureau of the United Auto Workers, and worked to get employers to retain the women workers they had hired as temps during World War II. In the 1950 and 60s, she was a Democratic National committeewoman from Michigan, mobilized the Michigan Democratic party behind JFK in 1960 and then pushed JFK to initiate the Peace Corp.

She quit the DNC in the late 60s to protest the Vietnam War and work for Robert Kennedy, went on to co-found the National Women's Political Caucus in the 1970s and was the leader of the pack in getting women equal status inside the Democratic Party which paved the way to get the first woman, Geraldine Ferraro on a national ticket in 1984.

Millie was also my mentor and my pal for 25 years. About 10 years ago she surprised me by saying that she had decided to "limit her activities." "You're slowing down?" I asked. " No, just confining my work to peace and justice." Now that's really kicking back!

Millie has been memorialized in the media this week and by Sen. John Kerry who described her as "five-foot-tall giant." Her protégé, Michigan Governor Jennifer Granholm, called her "our butterfly." She was referring to the "butterfly effect", a scientific theory which says that the smallest change in one part of the world can result in history-altering events someplace else.

"She whipped up change in countless corners of our world and helped write entire chapters in the story of our nation and our state. She gave women across the globe – including me – a voice in politics and policy. And for an entire lifetime, she stood next to giants – Walter Reuther, Eleanor Roosevelt and Bobby Kennedy – and cast her own mighty shadow," Granholm said.

I asked her friends what was missing from these tributes. Joan McLean, who produced a documentary of Millie's life, reminded me that she was incredibly substantive as well as political and, in addition, that she was a barrel of fun.

Millie was open to everything and everybody. She made friends with everyone—young and old, men and women, big and small, those who spoke English and those who didn't. Her friend, Michigan Sen. Debbie Stabenow, who was with her on a delegation of women to the Soviet Union, said: "Every place we went women would walk in off the street and ask if Millie was there. And they may have been speaking another language, but they would walk in and they would be looking for Millie Jeffrey."

In 1993, I brought her to a Newport Jazz event at the White House, and she not only knew all the political folks but a whole gang of musicians from Motown who thought she was just a hometown girl. "Miss Jeffrey," a Detroit DJ said, hugging her. "What are YOU doing here?"

I think it was her amazing vitality and sense of delight at life which is hardest to capture in these tributes. What I most treasured was sitting down with her after the day's work was done, having a glass of wine and swapping stories. And what stories she had.

Beth Fouhy, now a writer for the AP in California, told McLean about her joy in watching Millie work a room. "She's very physical -- she holds people's hands and she pulls them close, " Fouhy said. And, she pointed out that Millie would be wearing whatever she felt like. When most were in pants suits and pearls, Millie took to donning stretch leggings and, in the last few years, leather skirts and knee high boots.

Her grandson Tom remembers how she'd take him to art movies in Detroit, and my stepson Robert had some big conversations with her last year about Bruce Campbell, star of the Evil Dead movies, who Mille met in an airport.

She told Robert she'd forward Campbell's autobiography, "If Chins Could Kill, Confessions of a Grade B Movie Actor", as my husband and I listened in clueless. Many of our generation started to worry that we were becoming too stodgy to hold Millie's interest much longer.

So now our dear Millie has retired. Maybe. Last week as her family surrounded her with flowers and candles to make her final hours sweet and gentle she asked whether she was still alive or had already passed on. We could all imagine Millie wondering, not about the end, but about what was next, ever curious about what was coming up and ready for her next amazing adventure.