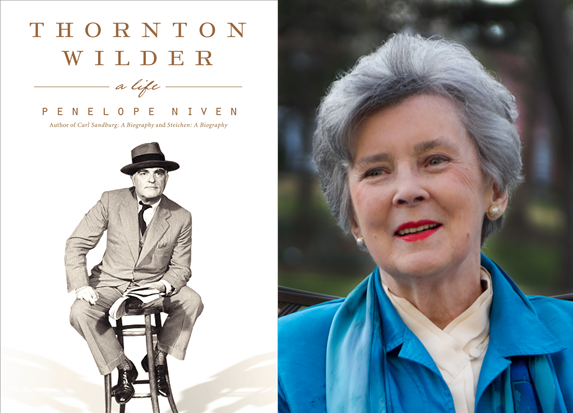 Penelope Niven: During the more than 30 years that I've been researching and writing biography, I've explored the lives and work of American artists. I happen to be drawn to artists who transmuted their lives and, by extension, all human life into art. My subjects have been mavericks, rebels who worked outside the box, tested the boundaries and reshaped their art forms. Carl Sandburg wrote unorthodox poetry, biography and children's literature. James Earl Jones has broken barriers in the American theater-and at the age of 81, is still doing so. Edward Steichen campaigned to prove that photography can be a fine art. And Thornton Wilder created unique plays and novels that still speak to a global audience.

So when the opportunity to write about Wilder came along, how could I resist? I almost did, however, for I had just finished years of work on my third book, "Steichen: A Biography," and I was exhausted. I swore I would never write another biography. No more research. No more endnotes. Never again. But time passed, and I got some rest. Thanks to Wilder's literary executor and nephew, Tappan Wilder, I began to look at copies of letters and journals that Wilder had written. I re-read his best-known novels and plays. Next I turned to the novels and plays I had not read before. I could see that Wilder the writer would be a compelling subject, and once I began to discover Wilder the man, I was enthralled. He wrote, "Art is confession; art is the secret told. . . . But art is not only the desire to tell one's secret; it is the desire to tell it and hide it at the same time." How can a biographer resist such a challenge? The more I learned about Thornton Wilder, the more I was inspired to write about him.

PN: The magnitude of the Wilder papers- not only thousands of Thornton's papers, but the letters and journals of his parents, his brother and his three sisters. The revelations in his unpublished journals and letters. The discovery that Thornton Niven Wilder's Niven ancestors and my Niven ancestors are related.

As a teenager reading Wilder's "Our Town," I was thrilled to see that his middle name was Niven, and I wondered if somehow I might be kin to him. When my younger sister Doris was about five years old, someone asked her if the actor David Niven was our father. "Not that we know of," she answered. Until recently, when people asked me if I am related to Thornton Niven Wilder, I echoed Doris: "Not that we know of," I said. Recently, however, I've discovered that Mr. Wilder's Niven family and my Niven family hail from the same very small village on the island of Islay off the west coast of Scotland. Several years of genealogical research have led me back to Malcolm MacNiven, born about 1715 on Islay. He fathered four sons, Daniel, Duncan, Archibald and Neil. Thornton Niven Wilder is a descendant of Malcolm's son Duncan. My Niven family and I are descendants of Malcolm's son Archibald, brother of Duncan. We share this grandfather many generations back. Some of the current Niven-Wilders and members of our Niven family are hoping to make a joint pilgrimage to Islay next year.

PN: I would be a musician, most likely an organist. I belong to a family of musicians. I love music, studied piano and organ, was organist at our church during my high school years, and contemplated majoring in music. But I love writing even more than I love music, so I decided to concentrate on language and literature in college and graduate school and in my work as a writer, editor and teacher. If I had to choose another vocation, I'd be a musician. I would study violin, which I've always wanted to do. I would try to write a musical- the book, the lyrics and the music.

PN: I'm re-reading Wilder's novels and plays as I prepare to talk with readers in North Carolina, Georgia, Wisconsin, Ohio and elsewhere about Wilder and "Thornton Wilder: A Life." Just now I'm finishing his final novel, "Theophilus North." My daughter, Jennifer Niven, is a writer, and I'm reading her sixth book-- her latest novel, "Becoming Clementine," just published in September. I've read it in manuscript drafts, of course, but it is especially wonderful to read it in print. And I'm reading Samuel Johnson's "Journey to the Hebrides" as part of my preparation for the trip to Islay in the Inner Hebrides.

PN: I really don't know. I've written four long, complex biographies, one children's book and a memoir, as well two special books for Old Salem Museum and Gardens and the Museum of Early Southern Decorative Arts in Winston-Salem, N.C. I've taught creative writing for years, and have edited or helped to edit a number of books. I am living a full, busy, demanding, rewarding personal life. I'm ready for some rest, some fallow time.

Then I plan to do several short projects. After that there is a novel I've been thinking about writing for the past 10 years. However, I'll never write another biography. Ever. ("You've said that every time you've finished a biography," my daughter reminds me. But I think I mean it this time.)

I am 73 years old, and inspired by my biographical subjects-my book people. Sandburg was still experimenting and creating new work in his 80s, as was Steichen, into his 90s. Wilder wrote his last novel when he was 76. James Earl Jones just finished a Broadway run at age 81, and has exciting projects ahead. My artists inspire me to believe that there are creative, productive years to come. So-we'll see.

For more on "Thornton Wilder: A Life" visit the Harper Collins website.