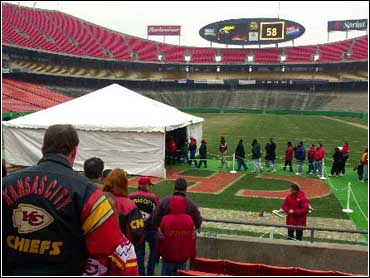 Derrick Thomas' open casket sat in the Arrowhead Stadium end zone, near the spot where he once sacked John Elway and recovered a fumble for a touchdown that clinched a playoff spot for the Chiefs.

Bundled against a cold February wind, thousands of fans filed past the coffin Monday in an outpouring of grief for the star linebacker of the Kansas City Chiefs.

In honor of this son of an Air Force pilot who never returned from Vietnam, a B-2 Stealth bomber came in so low its belly almost seemed to scrape the scoreboard.

The fans walked single file and two-by-two down the stadium steps, into a white tent where the body lay dressed in a light gray business suit.

Many dabbed at their eyes and hugged. By noon, almost 5,000 people had walked past the casket.

"This is the saddest day in Kansas City sports history," said Steve Warczakoski of Kansas City, Kan. "My favorite football player of all time."

One woman carried her 9-month-old daughter down the steps.

"Someday she'll be able to say she was here," the woman said.

The Chiefs have led the NFL in home attendance for five straight years. It is a town that loves its football players.

"I've been a season-ticker holder since Arrowhead opened," said Connie McQuain of Independence. "I saw Derrick his entire career and like everybody else in town, I feel like I knew him."

Thomas was just a few weeks past his 33rd birthday when his Chevrolet Suburban skidded on an icy highway and flipped several times. The Jan. 23 crash killed his best friend and left one of the NFL's most feared pass rushers paralyzed from the chest down.

The nine-time All-Pro was transferred to a hospital in his hometown of Miami and was said to be improving. But on Feb. 8 a blood clot in his legs created a pulmonary embolism that killed him almost instantly.

Since that day, fans have gathered at a candlelight vigil, created a memorial of poems and flowers at Arrowhead's iron gates and donated more than $25,000 to his Third and Long Foundation, which encourages youngsters to read.

"It wasn't enough that he became a great football player," said Barbara Arttell of Lee's Summit. "I felt it was the other things that he did."

On Monday evening, a private viewing was scheduled for family, friends and Chiefs players. Another service was set for Tuesday in Kemper Arena, where speakers will include NFL commissioner Paul Tagliabue and Hall of Fame quarterback Joe Montana.

Among the mourners Monday was Fred Patek, the Kansas City Royals' star shortstop during much of their gloy years in the 1970s.

His daughter Kim was paralyzed in an accident in 1992 not far from Thomas' crash. Kim Patek had no insurance and a big part of the expense was paid for by fans' donations and events like charity basketball games between Chiefs and Royals players.

"What I think back to most of all is how this community comes together and all the beautiful people there are in this town," Patek said. "All the things they did for me and all the things you see now, what's happening."

He stopped to wipe a tear.

"It kind of stirs up a lot of things in my past. But I guess the thing most of all it really hit me you can't believe."

Unable to continue, he apologized and hurried away.