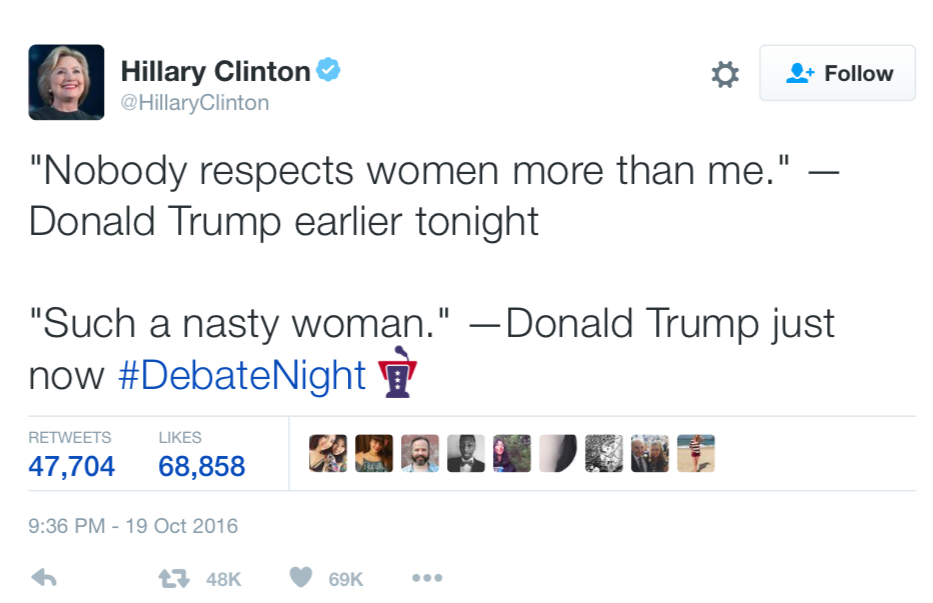 The moment from Wednesday night’s presidential debate that has gained possibly the most traction on social media began with Donald Trump calling Hillary Clinton a “nasty woman.”

Earlier, the Republican presidential nominee denied sexual assault allegations that have surfaced over the past few weeks, and repeated his assertion that “no one respects women more than me.”

So when Trump later referred to Clinton as a “nasty woman,” her campaign staff jumped at the opportunity to challenge his professed respect for the opposite sex.

The “nasty” exchange took place as Clinton fielded a question about taxes and Social Security.

Clinton explained that the country needs to put more money into the Social Security trust fund, which would require raising taxes on wealthy people – like herself and Trump.

“Social Security payroll contribution will go up – as will Donald’s, assuming he can’t figure out how to get out of it,” Clinton jabbed.

“Such a nasty woman,” Trump interrupted, speaking closely into the mic.

There have already been more than 828,000 tweets about the phrase “nasty woman.”

“Did he really just say that?!” several people asked on Twitter.

Clinton’s female supporters clapped back after Trump’s remark, taking ownership of the label.

“Proud to be another #nastywoman,” one supporter tweeted.

“I’m with that Nasty woman, we are stronger together,” another user wrote.

Before the night was over, someone even purchased the domain nastywomengetsh**done.com, and arranged for the website to redirect to Hillary Clinton’s campaign site – to the delight of her supporters.

“YOU GUYS this link redirects to HRC’s page and it’s genius,” one wrote, sharing the link. “Let’s take it to the polls and #GetNasty,” tweeted another.

By Thursday morning, the hashtag had morphed into merchandise. “Nasty woman” t-shirts were popping up for sale on several websites.

One “nasty woman”-themed t-shirt being sold on Google Ghost for $25 claims 50 percent of proceeds will go directly to Planned Parenthood.

Supporters are loving it.

“When something horrifying becomes something brilliant,” one Twitter user wrote.