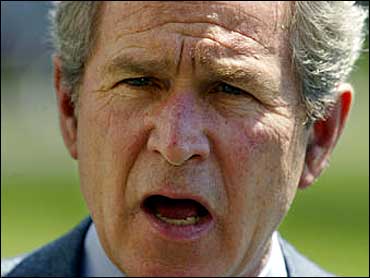 The move lays the groundwork for opening a campaign headquarters, hiring staff and raising money. Not that there was any doubt that Mr. Bush would be seeking a second term.

He already made clear he once again wants Vice President Dick Cheney as his running mate. The latest CBS News poll shows Mr. Bush with a 67 percent approval rating - but on the economy - it's only 43 percent.

The filing is the first chapter in a meticulous campaign plan devised by chief political operative Karl Rove, who will run Mr. Bush's campaign from the White House.

The first solicitations for campaign money will be mailed to potential donors in the next few days, White House officials said, and Mr. Bush himself plans to make his first appearance at a fund-raiser in June.

Final details are being made on a campaign headquarters in northern Virginia, the officials said. Ken Mehlman, White House political director and a Rove protege, will be named campaign manager. He moves to the campaign payroll Monday.

Rove has already drafted a campaign plan that looks 18 months down the road and outlines a strategy aimed at giving Mr. Bush a second term, a goal denied to his father in the 1992 race against then-Arkansas Gov. Bill Clinton.

The elder Bush began his reelection campaign with high approval ratings after the 1991 Persian Gulf War but was defeated by a Democratic candidate who tapped into the public's anxieties over the weak economy.

His son hopes to avoid the same fate by underscoring GOP efforts to improve the economy, primarily with a multibillion-dollar tax-cut plan. And while his father's standoff with Saddam Hussein quickly faded from public view in 1991, Mr. Bush's efforts to rebuild Iraq and stem the tide of global terrorism will likely make national security a prime campaign issue.

Filing with the FEC is a legal step required when a candidate plans to raise more than $5,000.

Mr. Bush has no plans to formally announce his re-election because, officials say, he will be busy governing. That explanation reflects a key part of his re-election strategy: Remain above the political fray while taking advantage of the attention and deference given to incumbent presidents.

A sitting president can, for example, travel the nation largely at taxpayers expense during a political campaign.

Democrats, who are fielding nine candidates in search of the presidential nomination, believe that continued economic woes, problems in postwar Iraq or even another terrorist strike on U.S. soil could change Mr. Bush's political fortunes.

For now, he is highly popular.

Recent polls show that 65 percent to 70 percent of Americans approve of his job performance, and slightly more say he has strong qualities of leadership. Mr. Bush and his political team believe the leadership trait will trump any concerns voters have about the president's policies, which Democrats assert are far too conservative for mainstream America.

Mr. Bush likely will have another advantage his father never had: A clear path to the nomination. Conservative Pat Buchanan's populist campaign left the incumbent politically bloodied and vulnerable after the primary elections. No Republican hopefuls have emerged as potential challengers to the younger Mr. Bush's party throne.

Nor does there appear to be a third-party candidate who could have the impact H. Ross Perot had in 1992 when he siphoned votes from the elder Mr. Bush.

In a meeting late last week, Mr. Bush approved his political team's plan to file papers this week. A few days later, he signed off on the first staff appointments, officials said.

Mercer Reynolds, former ambassador to Switzerland and a longtime Mr. Bush backer, will be named finance chairman of the campaign, officials said. Jack Oliver, deputy chief of the Republican National Committee, will move to the campaign to be Reynolds' deputy.

Oliver played a similar role in the 2000 campaign as he helped Mr. Bush raise more than $100 million, shattering all records.

Republicans say Mr. Bush could double that total under the new campaign finance law, although the Supreme Court is expected to have the final say on those rules, and is almost certain to raise more money than the Democratic nominee.

Marc Racicot, chairman of the RNC and a former Montana governor, is Mr. Bush's choice to chair the campaign, but that selection will not be announced until a replacement can be found.