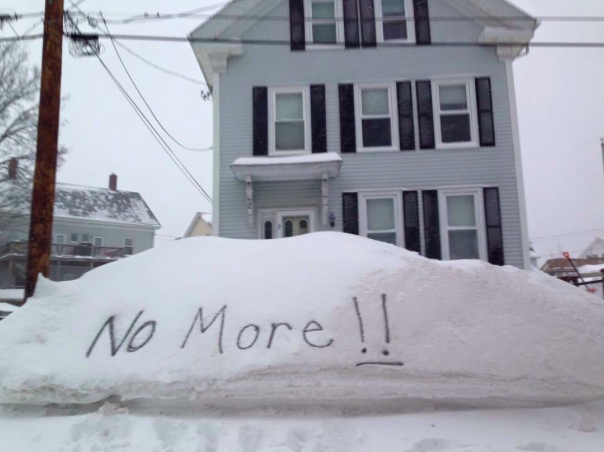 New England, we have a problem.

While snow totals are reaching record-breaking levels this winter, New England residents are starting to reach their breaking point.

That's probably why a video shared last year that was made to portray "how every single one of us feel about winter" is resurfacing on Facebook. It's clear that people -- Bostonians in particular -- believe the viral video that shows a woman decapitating a snowman in her front yard is still relevant today.

"Boston is terrible," one Facebook user recently commented on the video, which has more than 570,000 shares.

And the complaints don't stop there.

As another snow storm heads to the New England area, Boston residents discovered that the city could have another 18 inches to two feet of snow by Tuesday morning, reports CBS News correspondent Jericka Duncan.

That's when the memes, photos and #NoMoreSnow hashtags began to really circulate.

People in Gloucester, Mass., are "fed up," one person tweeted on Monday, along with a photo of a resident's house with "No More!!" carved in the snow.

According to Boston officials, plows have already removed enough of snow to fill 90 football stadiums.

"The snow is literally being put into the Boston Harbor," a Massachusetts resident tweeted.

New England has one clear message for Mother Nature: "Enough is enough."