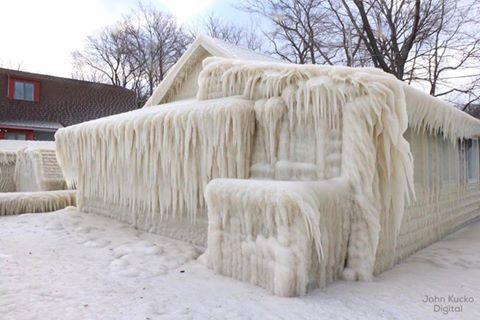 This house encased in snow and ice up to 7 inches thick may look fake, but photographer John Kucko assures his social media followers it’s anything but.

The beach home in Webster, New York, about 5 miles from Rochester, is located in a “very remote” area near the shoreline of Lake Ontario. In the spring and summer, it’s a weekend getaway; but when it comes to winter, it’s more of a hazard than anything else.

Kucko said he frequently visits the spot to shoot sunsets year-round. But when he stopped by the secluded spot on Sunday, he couldn’t believe his eyes.

“We’re probably coming off a record warm month of February, and then this happens,” Kucko told CBS News. “The waves have just been incredible.”

This house, unlike neighboring houses facing the lake, doesn’t have a retaining wall. Therefore, the freezing temperatures combined with water and wind coated the house in layers of ice.

“The wind chill was below zero,” Kucko described.

When Kucko posted photos of the house, which looks like it could be part of a scene out of “Frozen,” on his Facebook page, he was slammed by critics, claiming the picture had to have been photoshopped.

Hours later, Kucko posted a follow-up video to prove he did not, in any way, alter the photo.

“Some parts look apocalyptic up there,” he wrote on his Facebook page, along with a 30-second video. “The violent wind we’ve had the last five days has taken a toll.”

For the past 5 days, the area has seen incessant winds with gusts up to 81 mph, Kucko said. And it looks like the cold weather is going to continue, as a blizzard prepares to hit the Northeast starting Monday.

The National Weather Service announced a blizzard watch for coastal regions including New York City and upstate New York. Up to a foot of snow or more is forecast for all of Western New York.

For now, Kucko says the homeowners are steering clear of the igloo-like home. Maybe they’ll return when it warms up, he joked.

Dan Price, CEO who cut his pay so workers earned $70,000, quits
Thanks for reading CBS NEWS.
Create your free account or log in
for more features.
View CBS News In
CBS News App Open
Chrome Safari Continue
Be the first to know
Get browser notifications for breaking news, live events, and exclusive reporting.