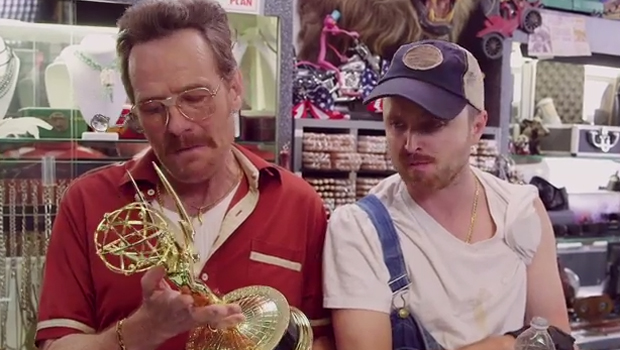 Nope, you're not high on blue crystal meth -- that is definitely "Breaking Bad's" Bryan Cranston and Aaron Paul dressed as two sleazy pawn shop owners in the video above.

So why are we being treated such a delightfully random "Breaking Bad" reunion this Tuesday? To celebrate the 66th annual Emmy Awards, of course. The Television Academy has gifted the world with a hysterical video, produced by Audi, starring Cranston and Paul as the owners of Barely Legal Pawn, a reality show that we so desperately wish was a real thing.

"We deal in the unique, the unusual, and the barely legal, and we always get the deal," Cranston boasts to the cameras, dressed as a slimy, gum-chomping salesman with his dim-witted brother Randy (Paul) by his side.

To make matters even more amazing, fellow Emmy nominee Julia Louis-Dreyfus stops by to join in on the pawn shop fun when she tries to sell one of her Emmy statuettes. FYI, the actress accidentally bought an island when she was drunk on rose wine and she has a few pricey bills to pay. (Hey don't judge, we've all done it!)

Basically, the rest of the week is all downhill from here.

Take a look at the side-splitting video above to witness all the "Breaking Bad" goodness for yourselves --complete with one last "Bitch!" from Aaron Paul.

Was this "Breaking Bad" reunion everything you could have ever wanted and more?

Sound off in the comments below.

How to watch the 2021 Emmy Awards
More
Thanks for reading CBS NEWS.
Create your free account or log in
for more features.
View CBS News In
CBS News App Open
Chrome Safari Continue
Be the first to know
Get browser notifications for breaking news, live events, and exclusive reporting.