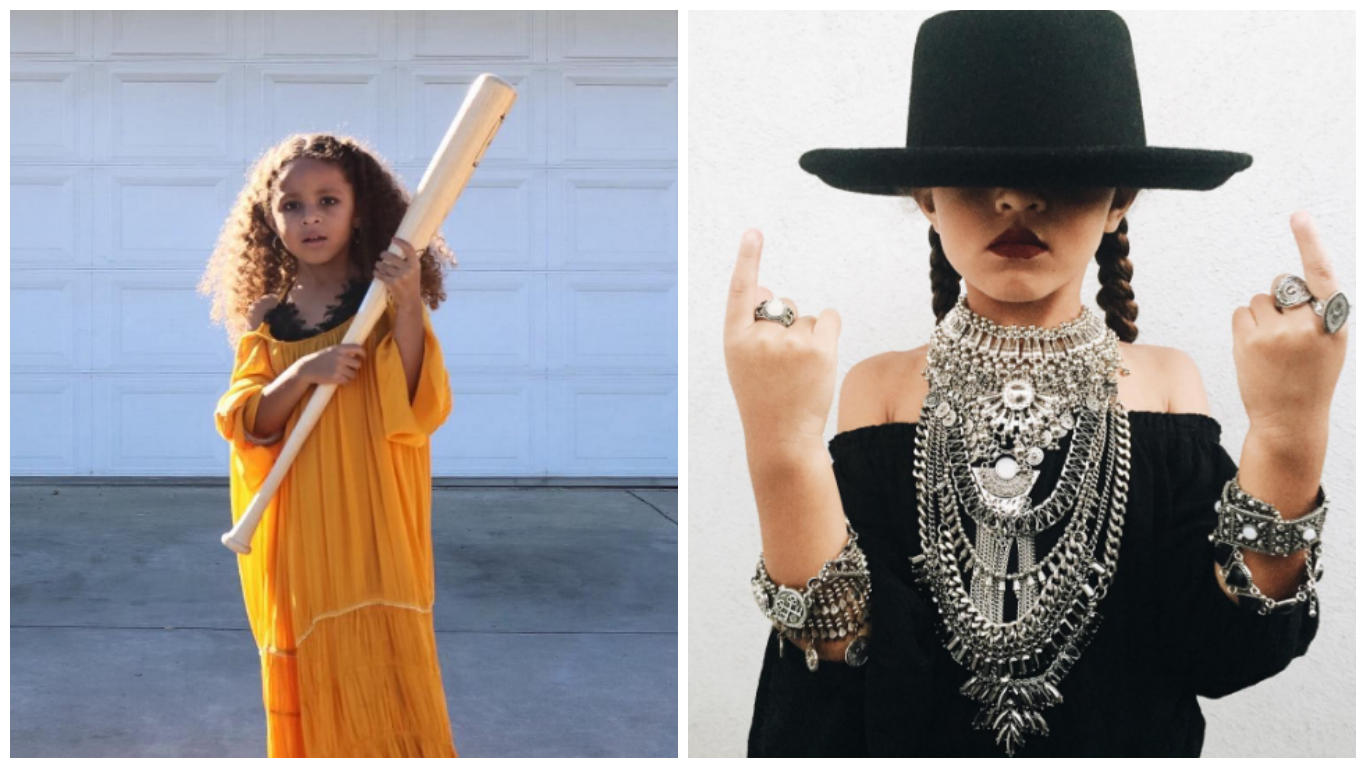 What did your kid dress up as this Halloween? A pumpkin? A superhero? A ghost?

Meet little Kylie Rae Brooks. She and her mother, Diana Alvarez, have been listening to Beyoncé together for years... well, five years to be exact, because that’s how old Kylie is. Just don’t let that fact faze you. Her fandom is very real.

“I would always listen to Beyoncé when Kylie was in the womb,” explains Alvarez. “But when she was about a year and a half, I noticed that every time I played a Beyoncé song she would start dancing and, over time, she became vocal about her choices in music and what she wanted me to play. So, the majority of our playlist consisted of Beyoncé, but hey I wasn’t complaining.”

This summer, Diana — who has been a Beyoncé fan since the Destiny’s Child days — surprised Kylie with tickets to the Formation Tour and the two had a blast. So, when Halloween rolled around, it didn’t come as much of a surprise to Diana that Beyoncé’s “Lemonade” album was at the forefront of Kylie’s mind.

“I had been asking Kylie since early September what she wanted to be,” Alvarez told CBS News. “She told me she wanted to be Beyoncé. So, I asked, ‘Which kind of Beyoncé outfit would you want?’ And she replied, “’Lemonade’ outfits.” I was like, “Outfits?’”

They started with the yellow Roberto Cavalli dress Beyoncé wore in her “Hold Up” music video. Out shopping one day, Kylie spotted a little dress that looked just like it. Pair that with Kylie’s adorable curly locks, a baseball bat, and voila!

Next, they tackled Beyoncé’s iconic “Formation” look, which Alvarez describes as “one of the easiest costumes I did because I had everything already. The oversized black hat... the dark lipstick... the silver jewelry... If not for little Kylie’s upraised pointer fingers — the PG version of the look — one might think the 5-year-old actually was Queen Bey.

“I ended up showing her how both looks came out and she didn’t want to stop there,” says Alvarez. “She had asked for the ‘Love Drought’ look, another song off of Beyoncé’s ‘Lemonade.’ She was obsessed with the face paint and hair. So, after school, I tried and snapped a few photos and posted it.”

But wait. The mother-daughter pair didn’t stop there.

“I wasn’t planning on doing a last look, but Kylie loved doing all the recreations of Beyoncé, so I caved and said OK, one more look,” Alvarez explains. “We ended up doing the ‘Lemonade’ album cover, it was fun and simple, all she needed were braids and a faux fur coat, which she already had. Call me biased but I’d say she nailed it.”

Many others agreed. Just take a look at this sampling of comments on Alvarez’s Instagram posts.

In other words, “Hold up, they don’t love you like I love you.”

Still, Alvarez notes that the Lemonade-inspired outfits were not without their naysayers; some social media users apparently questioning her parenting style and whether or not a 5-year-old girl would actually select that Halloween costume on her own.

Either way, Diana and Kylie aren’t letting the haters get to them.

“I asked her what she wanted to be and that’s what she picked,” says Alvarez. “I didn’t see any problem with it. That’s someone she looks up to and wanted to be. Parents dress their children up as Michael Myers, killer clowns, the Joker. Is that considered appropriate? As a mother, my first priority is to make my child happy and that’s what I did. She loved all her costumes. You can’t please everyone... but she had fun and loved it and that’s all that matters at the end of the day.”