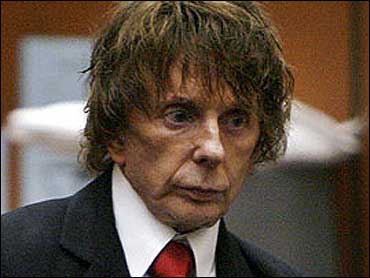 The jury in Phil Spector's murder trial deliberated for a second day Tuesday, then retired for the evening without reporting a verdict.

Spector is accused of second-degree murder in the shooting of actress Lana Clarkson, 40, in the record producer's Alhambra, Calif., mansion at about 5 a.m. on Feb. 3, 2003.

Spector, 67, faces 15 years to life in prison if convicted.

Clarkson died when a .38-caliber revolver went off inside her mouth several hours after she met Spector at her job as a nightclub hostess and went to his home for a drink. She was seated in a chair of a foyer.

During five months of testimony, prosecutors presented a chauffeur who said that Spector came out of his home holding a gun and said, "I think I killed somebody."

Prosecutors also called five women from Spector's past who testified of incidents when Spector, after drinking, threatened them with guns when they tried to leave his presence at his homes or in a hotel.

The defense contended that Clarkson was depressed over her flagging acting career and personal problems and killed herself either in a suicide or by accident.

Spector did not testify. He would face a sentence of 15 years to life in prison if convicted.

Monday, the jury met for a little more than 3 1/2 hours in their first day of deliberations, asking to see the gun that killed actress Lana Clarkson.

The snub-nose .38-caliber revolver was provided to the panel for a short time by a bailiff who carried it into the jury room in a box. Jurors kept the gun for only a few minutes before returning it.

Before handing them the case on Monday, Superior Court Judge Larry Paul Fidler asked them if any had heard or seen news reports over the weekend that could affect their discussions. No one raised a hand.

Fidler was apparently concerned about reports in the London newspaper The Mail on Sunday that quoted Spector as saying most of the prospective jurors thought he was either guilty or insane and that Fidler "doesn't like me."

The newspaper said Spector made the remarks to a documentary filmmaker he spoke to over a five-month period. Spector denied it.

"I did not make those statements," Spector told The Associated Press as he arrived at the courthouse Monday. "They are reprehensible and false. Whoever made them on my behalf should be put in jail. I'm sure the jury will do a good job."

Fidler said nothing about the accuracy of the newspaper report, but he said in a short hearing outside the jury's presence: "I would think anyone who wants to make a comment like that to a jury that's about to deliberate their fate isn't thinking about it."

Spector gained fame decades ago for what became known as the "Wall of Sound" recording technique. Clarkson starred in the 1985 cult film "Barbarian Queen."

Vikram Jayanti, who is working on a documentary about the trial, told the AP he wrote a piece for The Mail in which he told of his evolving belief that Spector may be innocent.

"I referred to things he has said to me well before trial," Jayanti said. "He was not talking about this jury. ... It's a complete misrepresentation that Spector is being quoted as lashing out at this jury."
By Linda Deutsch