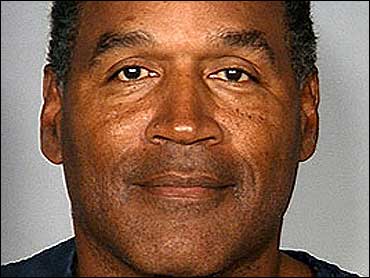 Authorities say a third man suspected of barging into a hotel room with O.J. Simpson to steal sports memorabilia has been arrested.

CBS News correspondent Steve Futterman reports Stewart, 53, is said to be a golfing buddy of Simpson's.

Police say Stewart lived at one of the residences that police searched early Sunday to recover sports memorabilia taken in the alleged Thursday night heist. According to Nichols, Stewart turned over some of the missing goods, including footballs bearing autographs.

Simpson is being held at the Clark County Convention Center in Las Vegas without bail pending a Wednesday arraignment and hearing revisiting the question of what charges he ultimately will face and the issue of whether he can be released from jail while fighting those charges.

Simpson claims he was retrieving collectibles that were first stolen from him, and that the raid was part of a sting operation.

Las Vegas police Capt. James Dillon says Alexander was one of two men involved in the incident who had a gun.

Dillon says two other suspects are in the process of hiring attorneys and preparing to surrender to police.

Sports memorabilia collectors say Simpson and others stormed into their room at the Palace Station hotel and casino in Las Vegas Thursday, threatened them with weapons, and stole from them.

The district attorney says he expects Simpson to be charged with seven felonies - including robbery charges carrying sentences of as much as 30 years per count - and one gross misdemeanor.

Police said they are giving Simpson no special treatment - other than keeping him separated from the rest of the general prison population for his own protection.

A lawyer for Simpson, meanwhile, has gone on the offense.

"We are definitely on the attack," says Galanter, a Miami attorney who flew to Las Vegas to appear on Simpson's behalf.

Galanter plans to seek Simpson's release on his own recognizance. Simpson, says Galanter, had offered to surrender even if he had to return from his home in Miami, but police instead chose to arrest him.

"If it was anyone but O.J. Simpson, he would have been released by now," says Galanter, who maintains that witness statements will clear Simpson.

Simpson, 60, is being held on felony charges including burglary, assault with a deadly weapon and robbery with use of a deadly weapon - charges which could be revised or dropped at Wednesday's hearing.

Simpson told The AP before his arrest that there was no gun involved and he was only retrieving items that had been stolen from him, including his Hall of Fame certificate and a photo of himself with former FBI chief J. Edgar Hoover.

"You can't rob something that is yours," says Galanter. "O.J. said, 'You've got stolen property. Either you return it or I call the police."'

Galanter acknowledges that the use of a gun would change the situation but he said Simpson was not armed.

"If, at some point, somebody else pulls out a firearm, it's still not a robbery for the person that wants his property back," says Galanter.

Loyola University Law Professor Laurie Levenson says the legal definitions would likely be disputed at a trial but she said the case seems to have been overblown.

"It seems like an awful lot of charges for what happened," says Levenson, who was one of the legal analysts covering the O.J. Simpson murder case more than a decade ago.

One bit of evidence confronting investigators and Simpson's defense lawyer is an audiotape released Monday by the celebrity news site TMZ.com, in which a man believed to be Simpson is heard shouting questions while other men yell orders to the people in the room.

The tape - purportedly of Simpson in the hotel room Thursday talking to the men he accused of stealing memorabilia from his football career - begins with the ex-NFL star demanding, "Don't let nobody out of here."

"Think you can steal my s-- and sell it?" says a voice identified as Simpson's.

The recording was made by Thomas Riccio, co-owner of the auction house Universal Rarities, according to TMZ. Simpson has said Riccio called him several weeks ago to tell him collectors were selling some of his items.

Riccio told TMZ he believed Simpson was planning to confront Alfred Beardsley, who was allegedly planning to auction off the memorabilia.

Riccio, according to "Entertainment Tonight" and "The Insider," received a voicemail message from Simpson in which Simpson says; "Hey man, Tom, it's O.J. What are they talking about a gun? … Ain't nobody have any gun, what does that... come from? I guess they feelin' guilty, so they try and make up something. Alright man, call me. Please."

Riccio's answer to that is not good news for Simpson.

Bruce Fromong, a collector who was in the hotel room on the night of the alleged crime, says he has known Simpson for a long time and was stunned to see the former football great come through the door.

Simpson called Fromong on Saturday, and in a tape of that conversation obtained exclusively by CBS News, Simpson tells his side of the story.

"Any event some of a few of your things were mixed up in my stuff," Simpson said on the tape. "I told you asked me to give it back to you, so how do I get it back to you? So let me know where to -- where you want to meet up to get it because, you know, I don't want none of your stuff, only my stuff."

One of the challenges for prosecutors in the case will be determining who actually owns each of the pieces of sports memorabilia, including Joe Montana's shoes and Simpson's Hall of Fame certificate.

Ownership is going be disputed in yet another way by Fred Goldman, who is filing to have items owned by Simpson turned over to him, including any memorabilia seized by police and the gold watch and suit Simpson was wearing when acquitted of the murders of his wife, Nicole Brown Simpson, and Goldman's son, Ron Goldman.

Goldman is seeking ownership to satisfy the terms of a $33.5 million civil court judgment against Simpson, who lost a 1997 wrongful death lawsuit filed by the Goldman and Brown families.

"Assuming that this case is resolved one way or another, at the end of the case, the stuff will never go back to Mr. Simpson," says David Cook, an attorney for Fred Goldman. "He's going to walk out of Clark County empty-handed."