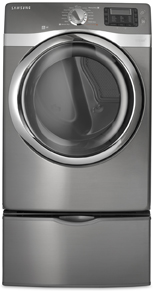 (CBS/AP) SUMMERVILLE, S.C. - Some thieves in southeast South Carolina apparently hope to clean up by stealing coin-operated clothes dryers, according to police.

Summerville police say more than a dozen of the coin-stuffed machines have been stolen from apartment complexes in the area in recent weeks.

Officers say the thieves hit one apartment complex two days in a row, taking four dryers and a washing machine. Five dryers were taken from another complex.

The thefts started last month. No arrests have been made.