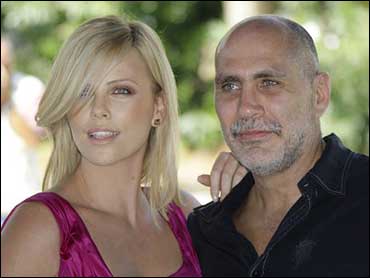 Guillermo Arriaga's directorial debut "The Burning Plain" opens with a wide shot of a trailer ablaze in the New Mexico desert. While the landscape appears barren and exposed, in reality is it concealing secrets that drive the story.

"The Burning Plain," written and directed by the "21 Grams" and "Babel" screenwriter, stars Charlize Theron as a troubled Oregon restaurant manager who is forced to confront her past when a mysterious visitor arrives from Mexico, and Kim Basinger, who appears in flashbacks as Sylvia's mother at a pivotal moment in her young life.

The film, which makes its debut at the Venice Film Festival on Friday, is one of 21 movies competing for the coveted Golden Lion, which will be awarded on Sept. 6. Directed by Mexico-born Arriaga, it is one of five U.S. pictures in competition.

Landscape is central to the movie - which Arriaga initially had titled "The Four Elements" - and water, earth, wind and fire all are present as the story moves back and forth from the searing dryness of New Mexico to the nonstop rain in Portland, Oregon.

Cinematographer Robert Elswit, who won an Oscar for "There Will Be Blood," was lauded by Arriaga for stunning shots of the New Mexico desert and Oregon coastline.

The movie is told through four converging plotlines, and cuts back and forth through time to reveal Sylvia's story.

"This is the exploration of the mystery of a woman called Sylvia who has an emotional journey that takes her to the extremes. It explores what makes her so damaged," Arriaga said.

No stranger to flawed characters, Theron said she loved the role of Sylvia.

"You should ask people that question. Why are people so flawed? Because that's who we are," Theron said. "Why is it when you watch a film and something happens that moves you - it either moves you to tears or gives a chill down your spine - it's because we can see ourselves in that moment."

Basinger, whose character Gina is in the throes of a passionate affair, and Theron don't appear together in the film, playing opposite Jennifer Lawrence as the younger Sylvia.

Theron, who also worked as a producer on the film, said there was a list of actresses to play the Gina role, but that they were thrilled to get Basinger.

"She's amazing," Theron said. "There is something about Kim. There's a strength with her leftover vulnerability from her 20s that's just unbelievably beautiful to watch. There are moments on the screen when she's shaking, her entire body is shaking for real. You couldn't act that."

The 17-year-old Lawrence said Basinger, who didn't appear in Venice, was extremely gracious, staying late to be off camera to give the young actress an eyeline.