This slice of life is offered by CBS News correspondent Celia Hatton, in the Beijing bureau. 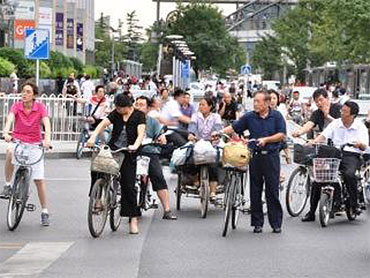 (CBS)
It's one of the most beautiful sights in China's capital: flocks of bicycle riders all moving in tandem through the city's wide boulevards. Metropolitan Beijing is packed with almost 12 million people and 13 million bicycles, making the simple two-wheeler hard to miss.

Ask cyclists about their bikes, though, and you'll uncover a less romantic side to the story. Few people in Beijing allow themselves to get emotionally attached to their bikes. The city's high rate of bike theft means an unexpected goodbye could come at any time.

"There's a saying that you're not a Beijinger if you haven't lost any bikes," explains retired teacher Ma Zhiqiang.

"I've lost five of them myself. One stolen bike was always on my wife's mind — a broken bicycle that was locked downstairs near our apartment. There was something wrong with its front tire. One day, the bike was gone and my wife was worried the thief might not be safe riding a bike like that. But there was no way for her to warn anyone!"

The Beijing police often publicize high-profile crackdowns on cycle thieves. One particularly strict 2007 police campaign against theft lead to 3,708 arrests and the recovery of 11,111 stolen bikes at 27 second-hand bike markets.

But that's just the tip of the iceberg. In Chinese law, it's not a criminal case if the stolen object is worth less than 500 Yuan (about $73). So, many people don't even bother to speak up if their bike goes astray. Instead, they do whatever they can to prevent the theft in the first place. 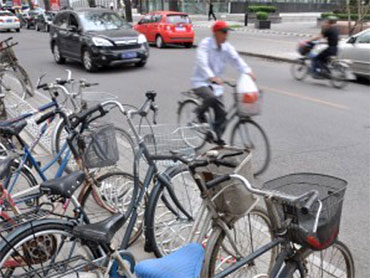 (CBS)
Some start with locks.

"I was lucky because I lost only one bike while I was at college in Beijing," explains recent graduate Chang Xu. "But I heard about a professor at our school who was angry because so many of his bikes had been stolen. He bought a brand new bike and put six locks on it and left a note saying, 'Can you steal this!?!', When he returned, he found a seventh lock attached to his bike with a note, 'Can you open this?'." It's hard to beat the thieves.

Others do what they can to make their bikes as unique as possible, making it harder for them to be resold. The English-language blog, Danwei, reports that in Shandong province, bike repairmen are regularly paid to dent their customer's bikes to make them less appealing.

"I had a friend who painted his bike with zebra stripes since bikes with obvious marks are hard to resell," explains office worker Su Yuanyuan. "Another friend started carrying his bike up ten flights of stairs every night so he could stash it in his apartment. One day, he was too tired to make the climb and he locked the bike outside. It was gone the next morning."

Apartment security guard Lao Kang, 50, agrees there's little anyone can do to protect a new bike. "There's a monitoring camera over there," he gestures, "but still, I've lost two bikes myself."

If the trend keeps up, Katie Melua's dire prediction may just come true.