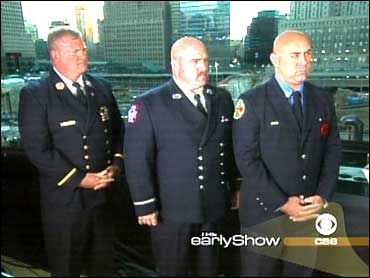 Only 20 people who were still inside the Twin Towers when they collapsed made it out alive, including six New York City firefighters from Ladder Company 6 in the city's Chinatown section.

Three of them remembered the events of the day on The Early Show Monday for co-anchor Harry Smith, who was reporting from ground zero.

They explained how assisting an elderly woman who worked in the north tower of the World Trade Center happened to put them in the right place at a very wrong time: a section a stairway that survived as the tower crumbled.

Capt. Jay Jonas, who has since been promoted to battalion chief, and five other firefighters from Ladder 6 responded to the attacks at the trade center immediately, arriving minutes after the first plane hit.

As they entered the lobby of the north tower, the south tower was hit.

Carrying 100 pounds of gear, the group started climbing the stairs in the north tower to help.

When they reached the 28th floor, the building shook, and Jonas ordered his men to evacuate.

On the 19th floor, they came across an older woman, Josephine Harris, who had walked down from the 73rd floor. She was exhausted, and not sure she could continue.

Bill Butler, now a lieutenant, the strongest man in the unit, put his arm around her and guided her.

But Harris was slow, and when they reached the fourth floor, she stopped, protesting she couldn't go on.

Capt. Jonas feared for his men, but they would never leave Harris behind.

Then the rumbling started, and the north tower collapsed all around them. Miraculously, the area of the stairway they were in, Stairway B, remained intact.

Hours later, with Mayday calls and major efforts from their fellow firefighters, the group was found and rescued.

Jonas told Smith on Monday that his men were in the stairs to begin with because the elevators were broken, and, "That's where people needed help, so that's where we hadda be."

Butler said carrying all that gear up all those steps was "a tough trek. We were running into a lot of people, some that were severely injured and burned, but they were being cared for so, while we wouldn't normally pass people who were injured, we had to that day for the people above that we had to get to."

When did they know it was time to get out?

"For us," firefighter Sal D'Agostino told Smith, "it was when the south tower had collapsed and the captain went over to the window and saw that the south tower was no longer there, and then he came over to us and told us it was time for us to evacuate."

When they came upon Harris, she was worn out and moving very slowly the men agreed.

"We made it to the fourth floor (with her) and she was so tired, she couldn't support her own weight anymore, and she fell to the ground and she was telling us to leave her," Jonas said. "We weren't gonna leave her."

"As (the building) came down," Butler added, "there was this tremendous roar, like the same shaking as when the south tower collapsed, but at the same time the roar — I liken it to two trains coming in different directions — and you're standing in between them."

But, said D'Agostino, the fact that Harris had to stop, and the firefighters stopped with them, saved all their lives: "That's the key to the whole thing, when she can't go anymore and she's telling us to stop (helping her), we stayed together, and we stuck with her and then a couple of seconds later, you could hear the floors pancaking one on top of the other."

What does the fifth anniversary of that day mean to Jonas?

"(Sept. 11 was) a very solemn day," he said, "but it was also a day that we saw the worst in people and also saw the best in people. We had a tremendous amount of courage and compassion and heroism shown that day. And sometimes that gets overshadowed by the grief. But these people were incredible heroes (even before) these buildings came down."