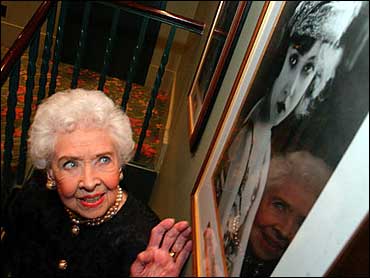 One arm reaching gracefully forward, the other extending to the rear, the 99-year-old struck a stylish pose Monday at the New Amsterdam Theatre. Nearby was a photo of Eaton in the same stance - as a 15-year-old dancer with the Ziegfeld Follies in 1919.

One of a handful of Ziegfeld dancers still living, Eaton was at the theater to help celebrate its 100th anniversary. The theater opened on Oct. 26, 1903, and was home to the Ziegfeld Follies from 1913 to 1927. The anniversary was marked Monday with a champagne toast and a musical program of songs from the Ziegfeld years.

"It was the best, most popular show on Broadway in those years," recalled Eaton, elegant in a black dress and coifed white hair, with pearls around her neck and large gemstone rings on her fingers. She was one of two former Ziegfeld dancers attending the event, along with 98-year-old Barbara Hunter, who performed as Billee Blanchard.

"It was never indecent; it was something you could take your family to," Hunter said. "It was beauty, mostly, and music."

The Ziegfeld Follies were put together by Florenz Ziegfeld in 1907 until 1931. They were lavish spectacles, famous for the beautiful show girls Ziegfeld put in them. Plenty of big-name stars also appeared, from W.C. Fields to Fred Astaire to Bob Hope.

The theater converted to a movie house in the middle part of the last century and then closed in the early 1980s. Disney renovated it for $36 million and reopened it in 1997, and it is currently home to the Broadway production of "The Lion King."

"They have restored it beautifully - just the way it used to be," Eaton said.

Two of Eaton's sisters also performed in the Ziegfeld shows, and her younger brother, Charles, acted in the Follies. Now 92, Charles Eaton accompanied his sister on Monday.

The Eaton siblings still dance, making time at least once a week to hit the floor. Doris Eaton attributes some her longevity, and her youthfulness, to that.

Nils Hanson, administrator of the Ziegfeld Club, which tries to help the remaining Ziegfeld dancers, said there are three other living dancers besides Doris Eaton and Hunter.

He said the show was successful because Ziegfeld did something that other producers in the United States had never done until then.

"It was really the first attempt by any producer to glamorize American women," he said.

The Ziegfeld girls were the inspiration for America's current best-known high-kickers, the Radio City Rockettes. They were originally called the "Missouri Rockettes" and made their show business debut in St. Louis in 1925. Their creator, Russell Markert, said he got the idea from the Ziegfeld Follies.