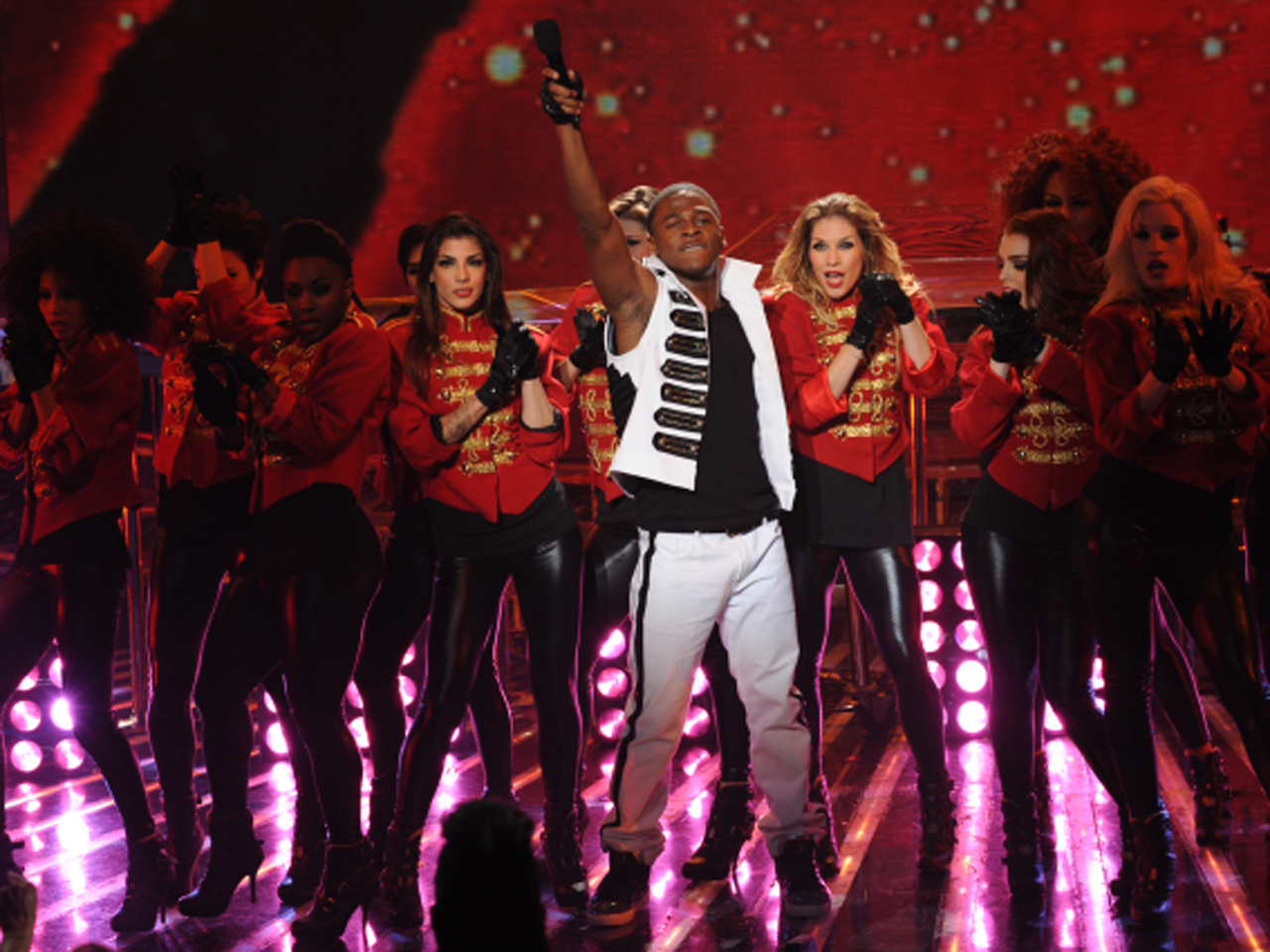 (CBS)There would be no more singing.

At least, no more singing for their lives.

For in last night's "The X Factor" results show, we would be denied the pulsating ecstasy of the singoff. America would decide. America, in fact, had decided which three acts would be in next week's final. By the end of the show, we would know.

In the meantime, we could sit back and endure the four semi-finalists performing together a song called "Shout." It was loud. It was proud. It shouldn't have been allowed.

Still, Steve Jones, Mannequin Man, spent quite some time telling everyone seated at home, sipping beer or chewing on their knuckles or doing something nefarious that "The X Factor" will be back next year.

He explained that there will be audition booths all over America and that you--yes, you, Mavis Springthorpe--could even audition that very second online. A million laptops were heard to open simultaneously, as versions of "Hallelujah", "Hero" and "Wake Me Up Before You Go-Go" filled the nighttime digital airwaves.

Mannequin Man then began to process the unveiling of the results. As usual, he wished everyone luck. Would he soon ask how they all felt? I felt he would.

"SAY MY NAME!" screamed one of the contestants suddenly. No, wait. That was Florence + the Machine, there to contribute a little extra drama and tension.

"We will never be afraid again," she sang. Surely, she was channeling the emotions of the four who hoped they would be among the three propelled that much closer to the Kilimanjaro of entertainment and that much farther away from the Killing Fields.

Everyone in Vegas surely believed that it would be Marcus Canty to go. Finally. Finally.

Still, first to be told he was through to next week was Chris Rene. His maroon leather jacket swayed with pride, as he performed highly rehearsed handshakes with both Canty and mentor L.A. Reid.

In an instant, Melanie Amaro was told that she, too, would be free to impersonate Mariah Carey or Whitney Houston next week.

Simon Cowell, her mentor, seemed especially elated, as he hugged her conspiratorially.

We were, therefore, left with Josh Krajcik and Marcus Canty. There truly is no comparison between the two. Krajcik's talent and potential towers above that of Canty.

But first we had to watch Nicole Scherzinger peddle some of her midriff-baring musical stimulation. The remaining judges, seated as if they were the Politburo, moved with such syncopation that it was as if a production assistant were pulling on strings attached to their backs.

We had to enjoy what seemed like the eighth commercial break of what wasn't yet an hour before discovering that it would be Canty going home. Surely it would be Canty. It had to be. And I've said that for at least two weeks.

Krajcik looked as if his entrails were soon to become extrails. Canty looked as if he was about to board a flight to Honolulu, where he would be joined by the lovebird of his choice.

Finally, finally, it was, indeed, Krajcik who was told he was through.

"This is not the last time you will see Marcus Canty," said Marcus Canty, echoing last week's words from the fallen Rachel Crow.

His demeanor was so genial that you'd wish losing footballers, politicians, lovers and "The Bachelor" contestants would behave this way.

"God blessed me so much. I gave it my all. At the end of the day, it's all you can do," he added sagely.

He told his supporters at home not to cry. He told L.A Reid to buy him a large martini, slightly shaken, slightly stirred.

Actually, I made up that last part. However, Reid did look him meaningfully in the eye and say: "You have my support."

When "The X Factor" returns next year, I wonder what sort of support that will have turned out to be.