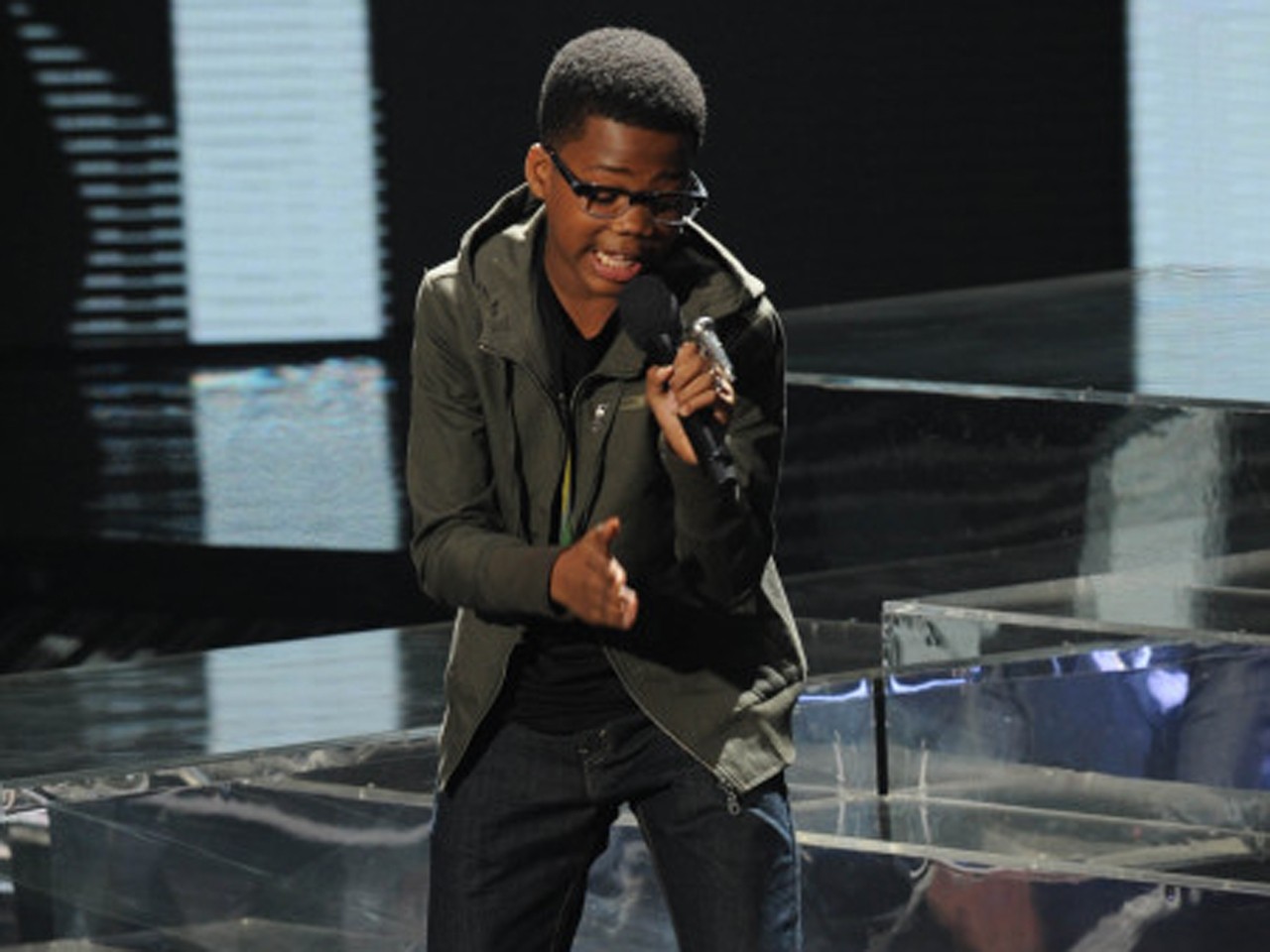 These were the two choices viewers were faced with after discovering that this week's "The X Factor" was to be a "Giving Thanks" edition.

Rachel Crow wanted to thank her adoptive parents. She had suffered abuse, living in a crack house as a baby. She had been born dependent on crack. She has a sister who was also adopted.

Thankfully, the 13-year-old Crow didn't choose to sing cliche. Instead, Yolanda Adams' "I Believe" offered plenty of gospel with a little - again - Duffyesque R&B. The 20 or so gospel singers, all dressed in white, delivered a heavenly chorus that almost threatened to overwhelm the little tyke.

As the audience lost its soul, Cowell offered a smug Svengali smile. "You've made a believer out of me," said Nicole Scherzinger. I am not sure whether she was referring to a particular religion. However, there was certainly a religious bent as Paula Abdul referred to Crow as an angel.

Marcus Canty is deeply religious. Last week, he was afraid to come over as debauched or even vaguely sexy. That was shortly before he crawled on his back between the long legs of eight rather comely ladies.

He's a momma's boy. What possible choice did he have than to perform "A Song for Mama", originally emitted by Boys II Men?

As he sang, it appeared that his mom might pass out. She waved her hand in front of her. The production team had carelessly failed to provide her with a fan - preferably one with a large picture of her son on it. Canty bent down at the front of the stage to grasp her hand. This was vaguely memorable. The performance was not, but the judges called it his best performance.

"You've had a yo-yo ride so far," said Cowell. "For the first time tonight I've felt a connection with you."

"You are as great as any great singer as any I've ever worked with," lied L.A. Reid.

Mannequin Man, the presenter born of one Welsh statue and one Welsh sheep, asked him: "How do you feel?"

Melanie Amaro decided to dedicate her performance to God. Surely no one would have seen any irony in the fact that the song she chose was by R. Kelly. Still, she took "The World's Greatest" and gave it every possible exalted emotion. The white-suited gospel singers were working overtime. They had clearly been given time off from their celestial duties, so they could support the faithful down below.

Amaro was entirely in her element. Where Crow was overwhelmed by the singers, Amaro complemented them. She lifted toupees from the heads of the hirsute.

Amaro then began to emote about how glad she was to be there, about how she had spent so much time away from her loved ones, letting down her guard.

In the middle of this spiritual experience, Cowell revealed that two acts would be sent home Wednesday. Now that is giving thanks.

You'd think after all of this we'd get to meet Chris Rene's sobriety counselor. "The X Factor" obliged. Rene told of how he almost died by crashing his car, drunk. He dedicated his performance to that counselor, Tim Fry. The song was "Let It Be," with a little bit of "Young Homie."

Regretfully, his performance was tinny, shallow and decorated with notes unintended by McCartney and friends. He also wore headphones around his neck, which was simply depressing. Just as the gates of Heaven opening behind him on the stage seemed a little too close to the reality of his life that Rene had just described.

The lady judges reached for platitudes like a cat reaches for milk on a kitchen counter. "I didn't think the first song worked. Then, thank God, you went back into the second song," said Simon Cowell.

Squeezed into the middle of this revival was Lakoda Rayne. How could they find one thing or person to whom they could dedicate their song? These girls had only known each other a few weeks.

Their song was Taylor Swift's "You Belong with Me." This belonged with midnight at a wedding in Alabama. These girls struggle when singing alone. They need backing singers who can drown (hopefully) their disharmonies.

"This week you actually managed to drum up some excitement," said Reid.

Nicole Scherzinger, whose face looked oddly pinched throughout the evening, gushed. Even Cowell began to see possibilities of making money out of them. He described them as "four sweet girls." Abdul wept, because their limit was, apparently, the sky. Some might feel their limit might be Wednesday.

Handsome 60-year-old Leroy Bell praised his mom, who died two years ago. Sarah McLachlan's "Angel" might have seemed like a curious choice. Bell exemplifies competence. That's the problem. Even though the white-suited winged ones appeared yet again to lift him up, he was just another singer.

We then had an interlude to see what people were saying on Twitter. We learned that they thought Reid was wearing lipstick.

This was a pleasant preamble to Astro, who last week acted out and this week would no doubt sing about himself. His parents attempted to justify his abject behavior in terms such as "abandonment."

So he dedicated his performance to them, right? No, no. He dedicated this original to his fans. He needs their money - I mean their votes - more. His whole song was all about begging the fans - the Astronauts - to vote. This wasn't rap. This was an ad. This boy really believes there are "Astronauts across the world."

"Can I be an Astronaut?" waffled Abdul.

Cowell said he admired him, because he can be unpredictable and "we all have tantrums." Thankfully, tantrums sell. "It wasn't the perfect song," he added.

Drew decided to dedicate her performance to her friend Shelby. Shelby is her strength. She tells her not to worry about what anyone else thinks. Demi Lovato's "Skyscraper" is not merely Drew's song. It is Drew and Shelby's song.

Naturally, Drew gave it the Feisty treatment. She really could offer to supply music for the next five Apple campaigns and not bother to sell any songs at all. Sadly, she scraped some inelegant notes and didn't really manage to move anyone but a few confused teens. She might have placed herself, as they say on "Dancing with the Stars," in jeopardy.

"You're doing songs for people that are 40," said Reid. He was not impressed. He might not have been aware that Lovato is 19. Drew said this song was important to her and to everyone who thought they were not good enough. Which is what Cowell suddenly seemed to think of Reid.

"I am sick to death of your pointless, stupid criticism," Cowell said to Reid.

Josh Krajcik has a 13-year-old daughter called Rowan. He had her when he was 17.

The Stones' "Wild Horses" is a song he has performed the whole of her life. Krajcik's was yet again the class performance of the night. He has a purity, a simplicity and a sheer depth of talent that the rest of the competitors simply cannot match. It doesn't mean he'll win. It simple means that he's the best.

Abdul said he was bigger than the song he sang.

Cowell praised Krajcik's mentor, Scherzinger. Scherzinger wept. Oh, why should we care about these judges? Krajcik doesn't need judges. He just needs money so that he doesn't have to make burritos any more.

Hopefully, he will soon be able to give thanks that he doesn't have to do shows like this any more.