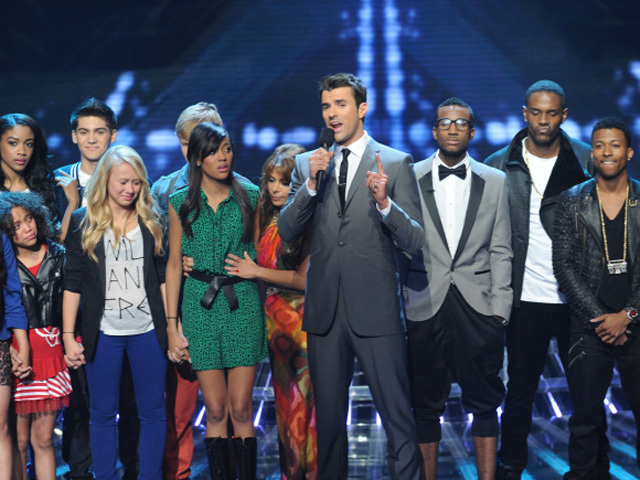 "The X Factor", unlike "American Idol," is supposed to be gimmick-free. Yet here we were at Movie Night. Yes, music that either came from movies, was co-opted by movies, played for ten seconds in movies, or was hummed or whistled by Tom Hanks in movies.

Stacy Francis didn't want to be typecast like a gospel diva. So she went for something uptempo, a song called "Queen of the Night" from "The Bodyguard." It was co-written by X Factor judge and mentor L.A Reid.

Francis, the 42-year-old mom with the face of a thousand hurts, showcased her inner shimmying. She swayed with abandon. But had she abandoned a little of her soul?

Reid said she did better than he thought she would. But surely "I Will Always Love You", he said, would have been a better choice.

"I really don't like the song," Paula Abdul said, turning to Reid. "And I'm telling you as your friend."

"You look cute, but I would have you wearing that somewhere else," said the always sartorially sophisticated Simon Cowell.

Reid decided Marcus Canty should sing something from "Car Wash," which for many is more of a song than a movie. "I'm Going Down" is a song performed in the past by large female voices. In Canty's throat, it lay a little limp, like an injured lamb in search of a sympathetic shepherd. Worse, Canty wore a shiny silver jacket that made him look as contemporary as a platform boot.

Naturally, Cowell loved it, though he did mention that the jacket said "cabaret," which wasn't a bad movie at all. I wonder if Cowell has even seen "Me, You and Dupree." Still, he gave Drew (the former Drew Ryniewicz) Coldplay's "Fix You" from that movie.

She wore a large billow-bottomed dress, something that Lady Gaga might have considered had she still been, well, 23. Drew is 14, however, and while she offered a few bum-bottomed notes, what viewers were supposed to focus upon was the whole package: The look, the pink and blue streaks in the hair, the stage lighting.

"I don't know if it's the same song from last week," mused Reid. He believes that each of her performances has been largely identical. Paula Abdul called her "honest." Then she turned to Drew's mentor, Cowell and sniffed: "I am not giving you props for what she's wearing."

He retorted: "Drew designed that dress herself." He added: "Thank God I'm her mentor." The latter information seemed slightly less interesting than the former.

Movies tend to steal the best songs anyway, so one got the sense that Leroy Bell simply allowed Scherzinger to choose one of his favorite songs: U2's "Still Haven't Found What I'm Looking For," which allegedly played during "The Runaway Bride."

What could he add to it? Little. He gave more overt emotion than he had in his previous performances. But, to use one of Cowell's favorite new aphorisms: "Is this someone worth a $5 million contract?"

Oh, Simon, they don't really give out $5 million contracts these days, do they?

"This time you got it right," opined Reid, who had admitted Bell had rather bored him.

Lakoda Rayne is one of the two remaining groups, rather than yet another country singer from somewhere in the countryside. Abdul gave them Keith Urban's "I Wanna Love Somebody Like You."

They gave it a lot of very shiny hair, two pairs of fairly tight shorts and several very uncertain harmonies. Abdul, who encouraged them with a mother's desperation, stood to applaud at the end. "You've become my favorite girl group in the whole competition," smiled Reid, sneerily. Yes, they're the only girl group.

"Last week, you were like the silly season version of the Stepford Wives," whined Cowell, before pouring praise toward their pristine images. Astro, unlike Jay Leno, writes his own material every week. Despite the movie theme, he took Eminem's "Lose Yourself" from "8 Mile" and gave it lines like "Last week I was unknown, this week I'm major," as well as offering homage to the recently deceased Joe Frazier and Heavy D.

This was the first (and perhaps only) truly moving performance of the night. Even though, as a viewer, it isn't easy watching Reid, whose face makes you believe he is about to hit someone very hard with a piano when he moves to Astro's rap.

"What I like about you is that I believe that every star has to have a work ethic," said Cowell, admiringly. "You have the audacity to take an Eminem song and rewrite his lyrics," noted Reid.

Amaro's hair gets better and better by the week. But there was nothing remotely hair-raising with her rendition of the song, other than to hear a woman say she was a man.

"I didn't find it that inventive," said Reid.

Regretfully, Abdul's groups have needed a lot of healing over the last couple of weeks. Stereo Hogzz, from the difficult wasteland that is Houston, were in the X Factor wasteland last week, only escaping elimination because another group was deemed even worse.They sang something that surely few know: "Ain't No Other Man," a Christina Aguilera song from "Get Smart."

With the help of hordes of scantily-clad lady dancers, they got through a dull song with a reasonable amount of polish and absolutely no hope that anyone might remember it in the morning.

Reid was upset that he didn't know the song. Worse, he hadn't even written it.

Scherzinger described it as "bananas." One assumes she meant it was full of potassium.

"Here's my problem, guys," began Cowell ominously. "You're not performing the record you would make." Oddly, Cowell was right. This was like a Broadway rehearsal. In Houston.

Josh Krajcik, the burrito-making re-incarnation of Joe Cocker, was given "With a Little Help From My Friends," a Cocker-styled Beatles song that apparently wafted into "Across The Universe." Gosh, Krajcik. After a first verse that promised little, he smeared his own burrito-oiled burr all over the song. Was it quite Cocker? No. Was it just maniacal enough? It was.

"Your voice is comforting," said Abdul. No one ever said that to Joe Cocker.

Cowell thought he looked too much like Dracula with his brides. There were a few of those lady dancers writhing around him, as if hoping for a drop of blood (or, perhaps, burrito juice) from Krajcik's mouth.

Chris Rene was given Coolio's "Gangsta's Paradise" from the movie "Dangerous Minds." Otherwise known as a rap to the tune of Stevie Wonder's gorgeous "Pastime Paradise."

When you see a genuine, original rapper like Astro sing from his heart, his soul and his sneakers, Rene seems like a very weak pretender. Still, he had what seemed like 20 dancers who had stolen some clothes from an army of drunken Cossacks.

Rachel Crow has charmed many with her tale of desperation for a new bathroom. Yet her true story emerged yesterday. Crow was born into a crack house and suffered abuse before she was adopted.

"I don't think I've done a good job with her so far," admitted Cowell, in a strange fit of self-awareness. He gave her Beyonce's "I'd Rather Be Blind," which apparently appeared during the great movie "Cadillac Records."

It required Crow to be mature. The makeup with which she was saddled again might have reminded some of little pageant girls pushed by their mothers into pretending they are adults. Crow is good. But perhaps it's a little too early to be pushing her to this.

Reid adored it. "My favorite yet," he said.

"Simon, I'm so happy that you listened to me," crowed Scherzinger, as if listening was in Cowell's list of top ten favorite activities.

Crow interrupted: "I chose my own song this week." So there.

And so we were at the end. You might be sad that I haven't mentioned the anodyne mannequin who presents all this. His name is Steve Jones. In Britain, they are laughing at him because he is attempting to Americanize his broad Welsh accent. He hasn't managed to Americanize the word "Twitter", which continues to have, as its main constituent, the word "twit."

However, here's something to make you believe in his stardom. Twitters have emerged of him trysting with Scherinzger. Now that's stardom.